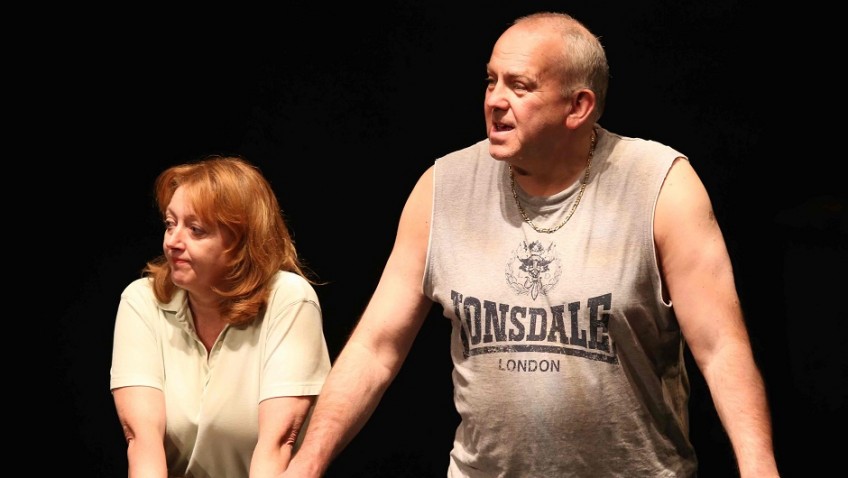 Regular bursts of laughter fill the auditorium during the 80-minute, two-act play that is Shafted. As the wordplay implies it takes us up north to the world of mining – except, of course, there is no mining any more. In the aftermath of the gruelling, violent 1984 miners’ strike, pit closures have brought devastation to livelihoods, individuals, communities and personal relationships. Dot and Harry are just two of those struggling to rebuild their lives.

The co- writers are multi-award winning playwright, director and actor, John Godber – one of the most performed writers worldwide in the English language, and his wife Jane Thornton, director, actor and writer for stage, TV and radio. In fact, it’s the two of them who make up the entire cast of the play as Dot and Harry in a rare stage appearance together.

Onstage, the faded pride of miners’ banners forming the backdrop, Harry’s new life unfolds and unravels, assisted by drooping flowers, a watering can, two metal dustbins, a broom, a stepladder and a green garden gate over which the broken, defeated, demoralised, bitter, depressed Harry can hang his bored, weary and oft-times addled head. Yet with every terrible twist and tragic turn life takes, humour comes shining through.

As Harry, Godber’s delivery is superb, his witticisms, accent and sarcastic turns of phrase flowing wonderfully naturally, while Thornton’s long-suffering Dot is equally real. The pair fight and bicker endlessly, adversity and unemployment giving them all the time and reason in the world to annoy one another. As they struggle and stumble through set-backs and ill health towards old age, they first hump a step-ladder, bucket and chamois around to clean windows, then exchange green garden gate for green garden bench and run a B&B in Bridlington. Thirty years on, the rawness of what’s been lost and the pain of being shafted by Thatcher and her police force, scarcely lessen. Yet as suffering and bickering carry on apace, quips and comic banter abound.

Via Dot and Harry, Godber and Thornton reveal a small slice of life in the ongoing story of what’s become of the people and their communities since the Battle of Orgreave and the subsequent closure of all the pits that had brought purpose, pride and self-worth to generations. The North will never be the same, they say, and it obviously isn’t.

In spite of the shuffled chronology in Act II and the odd monologue, this little tragicomedy is somewhat linear and thin, the constant bickering proving a tad much at times. The piece lacks the vivacity, momentum and richness of other Godber plays like Bouncers, and hasn’t the depth, power and impact of Bryony Lavery’s Queen Coal, or the tightness, variety and verve of Richard Cameron’sGlee Club or Boff Whalley’s We’re Not Going Back, where live music wins hands down against the snatches of records that burst forth in Shafted. All the same, the play’s sparseness has enough charm and sparkle to captivate an audience.