Home / LIFESTYLE / REVIEWS > / THEATRE REVIEWS / Sasha Regan’s all male The Pirates of Penzance is touring the UK and is great fun. 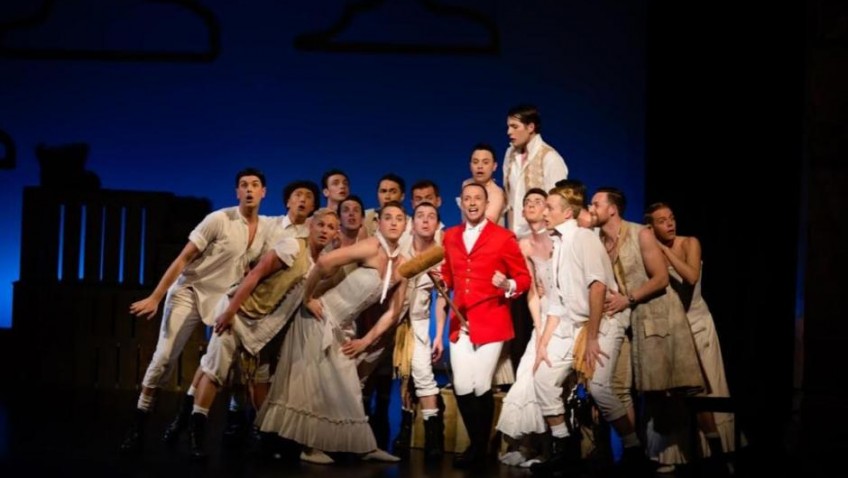 Sasha Regan’s all male The Pirates of Penzance is touring the UK and is great fun.

Gilbert and Sullivan’s comic opera has always has been one of the most popular of the Savoy Operas ever since its premiere in New York in 1879.

I first saw Sasha Regan’s all male production in 2010 in Wilton’s Music Hall. Since then it has been to Australia and back. It’s in good shape.

There is nothing original about all-male productions of Gilbert and Sullivan. The British public schools used to do them all the time in the first 50 years of the 20th century.

What is original is that it is a professional company doing it and Regan’s modest, piano-only production does not (as some people might wrongly presume) turn G&S into a gay drag show.

The silly, simpering romantic girls are hilarious. The boys, dressed all in white, wear corsets and petticoats but they don’t wear wigs and they don’t wear make-up. Their jet-black hair is cut short and neatly combed. They look like those girls in the 1920s who wanted to look boyish.

The boys do not camp it up. There is no sexual innuendo. They sing sweetly. Alan Richardson, whom I saw playing Mabel at Wilton’s, is as good as ever. His coloratura is amazing and he is surprisingly touching in his solo when Mabel sings “I love you” with total sincerity.

The Pirates of Penzance is touring and will visit Winchester, Bath, Guildford, East Riding, Bridlington, Brighton, Exeter and Hackney.