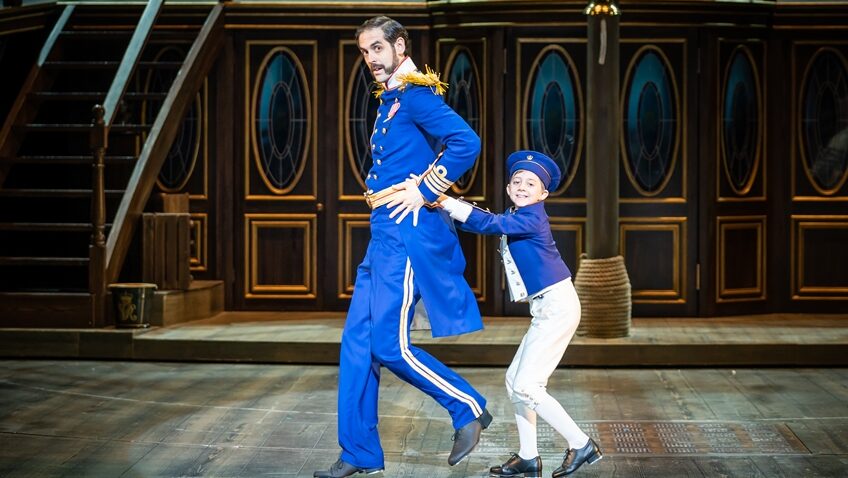 Ever since its first performances in 1878, Gilbert and Sullivan’s operetta has been hugely popular on both sides of the Atlantic with theatregoers enjoying the gentle debunking of the Queen’s navee, the British class system and the flag-waving patriotism.

I am surprised, after the enormous commercial success of Joseph Papp’s The Pirates of Penzance at Drury Lane Theatre in 1981, brilliantly orchestrated and wittily staged, that nobody has given HMS Pinafore the full Broadway show biz treatment.

ENO’s Pinafore is conducted by Chris Hopkins and looks good. Takis designs a handsome ship and provides some gorgeously coloured crinolines for Sir Joseph’s cousins, sisters and aunts. Sadly, Cal McCrystal’s production is one of the least funny I have seen. The diction is often poor, too.

Nothing is made of the best joke when Captain Corcoran and Ralph Jackstraw discover their foster mother had mixed them up at birth and instantly reverse roles, the common sailor becoming an uppercrust gentleman and the gentleman becoming a common sailor.

I once saw an Irish production in which the crew were high-kicking Tiller Tars, all in love with Ralph Rackstraw and they were hilarious. Here the male chorus all look far too old and there is not a comedian or dancer among them.

The running gag of a very old lady who is bent double and constantly losing her way is so laboured as to become more and more irritating.

I also did wonder what the singers thought about McCrystal’s awful habit of getting somebody on stage to upstage them with some extraneous comic business whilst they were actually singing.

The star turn should be Sir Joseph Porter, a caricature of W.H.Smith, who had just been appointed First Lord of the Admiralty by Disraeli and never been to sea. Unfortunately, Les Dennis, under par, has not got his comic act together yet. John Savournin as Corcoran is much more assured and knows exactly what he is doing and how to act and sing G&S and time his laughs.

Nine-year-old Rufus Bateman steals the show as a cheeky cabin boy, Corcoran’s sidekick, a newly invented role. It is Bateman who leads the chorus in a joyous tap-dancing routine, which opens the second half and is the production’s high spot.