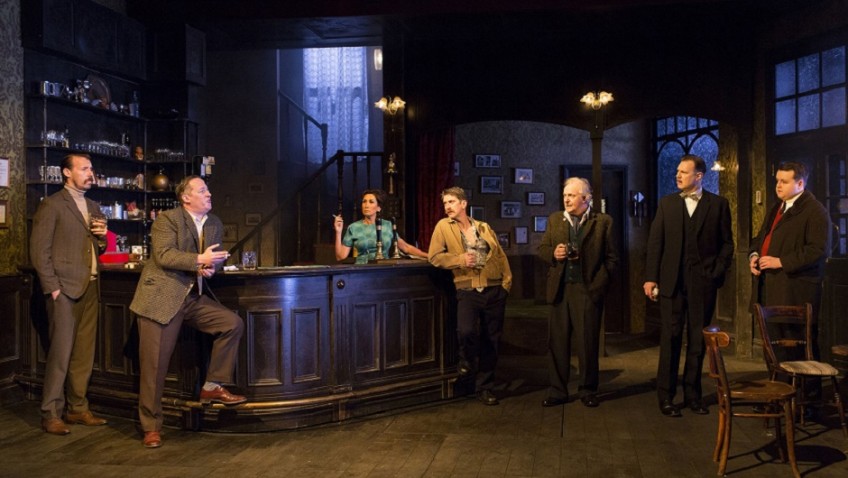 “Hangmen” could be in the running for Best Play Award

Martin McDonagh has a fine body of stage work: The Beauty Queen of Leenane, The Cripple of Inishmaan, The Pillowman andThe Lieutenant of Inishmore plus a fine film, In Bruges.

The good news is that his witty black comedy thriller about capital punishment and miscarriages of justice, originally staged at the Royal Court, has now transferred to the West End.

I enjoyed it first time round. I enjoyed it as much the second time.Hangmen could be in the running for Best Play Award.

Matthew Dunster’s production maintains the tight grip it always had and the cast is perfect.

The time is 1965, the year hanging was abolished. Most of action takes place in an Oldham pub owned by England’s last hangmen and frequented by his brainless and sycophantic cronies.

David Morrissey is the whiny, insecure dickey-bow publican, who boasts he hanged 233 people. He is put firmly in his place by the former number one hangmen (John Hodgkinson) who resents a bluff, arrogant, stupid coward like him getting press coverage in the local newspaper.

Johnny Flynn has a big success as an intruder from the South of England who could possibly be a murderer. He could equally possibly not be a murderer. Flynn is both charming and menacing and delivers his dialogue, with their Ortonesque speech rhythms, with comic assurance.

Andy Newman is a weedy pervert, who plots a revenge, which goes horribly and violently wrong; but then a McDonagh play without any violence wouldn’t be a McDonagh play, would it?