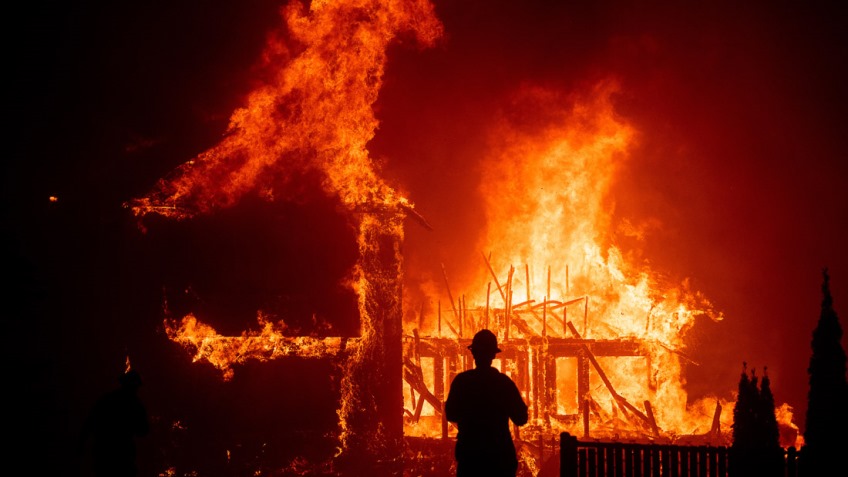 Ron Howard’s blistering new documentary is highly topical, but his approach and emphasis are questionable.

Rebuilding Paradise, Ron Howard’s follow-up to his Pavarotti documentary is, like La Haine – also released this week – all too topical. While residents of the picturesque, close-knit, all-American town of Paradise, California cite Hurricane Katrina, the recent forest fires ravaging the Western states from California to Washington and the Beirut explosions might come to mind as you witness the emotional and tangible impact of death, homelessness, escape, trauma and anger. Anger because the cause of loss was human greed and human negligence.

For Howard, the subject is close to home with deadly fires threatening Los Angeles every year. On the morning of Nov. 8, 2018, however, a devastating firestorm North of San Francisco became the worst and costliest (to date) in California’s history.

Unnoticed, a faulty Pacific Gas & Electric (PG&E) transmission line ignited a wooded area at Camp Creek Road. Spread by heavy winds, and soon out of control, the fire was finally extinguished on November 25th by the first rain of the season. The toll is staggering: 85 people died and 95% of the town was destroyed, including 14,000 homes, hospitals and all but one school. Decades of poor land management and changing weather patterns due to global warming contributed to the fire’s severity.

Howard lets the sympathetic and resilient residents tell their stories, beginning with “Woody” Culleton, who arrived in Paradise in 1981 and lived as the town drunk before turning his life around, becoming Mayor in 2004. We see him rebuilding his home at the end. The marriage of proud father and empathetic Police Officer Matt Gates, does not survive the ordeal. Former fire safety volunteer Phil John survives the fire, but dies of a heart attack in the aftermath. Though overwhelmed, his tireless wife, Michelle John, Superintendent of Schools, is determined to stage a graduation ceremony for the High School seniors. Krystle Young has no relatives to stay with as her entire family is from Paradise. Asked for her recollections, Krystle’s four-year-old daughter yelps, ‘Fire! Fire!’ before returning to devour her huge cookie.

Engrossing as it is, Rebuilding Paradise provides only a cursory look at the issues raised in the film and at what it really means to be suddenly homeless and jobless. Is one beset with PTSD and too traumatised to act? While 90% of the inhabitants spread into neighbouring areas, 3,000 remained behind trying to rebuild their lives. How does one come to terms with the loss of all tangible memories and how does one move on? Perhaps in his quest to be as comprehensive in covering the event as he was in covering Pavarotti’s life, Howard ran out of time to explore the “there-but-for-grace-of-god” feelings that any viewers will have.

It is thrilling to see the real Erin Brockovich, (portrayed by Julia Roberts in the Academy Award winning biopic from 2000), galvanise the residents of Paradise over PG&E’s culpability and what will, knowing Brockovich, turn out to be a huge class action law suit. And it is fascinating to hear from a contrite spokesperson of the company, beleaguered with similar problems all over the state. But his fate, PG&E’s bankruptcy, the lawsuit, the derisory fine, and the settlement – apparently some residents received PG&E shares in lieu of cash – are omitted, and are an integral part of rebuilding any town destroyed by fire. Moreover, having waited two years after the fire to release the film, waiting a bit longer would have yielded dramatic results. For in June this year, Bill Johnson, PG&E’s CEO, entered guilty pleas on behalf of the company for 84 felony counts of involuntary manslaughter stemming from the fire, providing the victims with closure if little else.

At one point in the film, Howard takes us up to the state capitol, Sacramento, for a glimpse at a debate that will resonate with UK audiences. Representing Butter County (in which Paradise is located), James Gallagher looks for funding in Sacramento. Everyone is sympathetic, but this is a recurrent problem and the more homes that are destroyed every year, the fewer taxpayers there are and the heavier the burden on the state budget. Assembly Member Laura Friedman asks whether ‘we have a responsibility to stop building in areas which are indefensible.’ This debate, held every year when Somerset, England floods, receives no definitive consideration in Sacramento either.

You can read our review of Pavarotti by clicking here.

You can read out review of La Haine by clicking here.