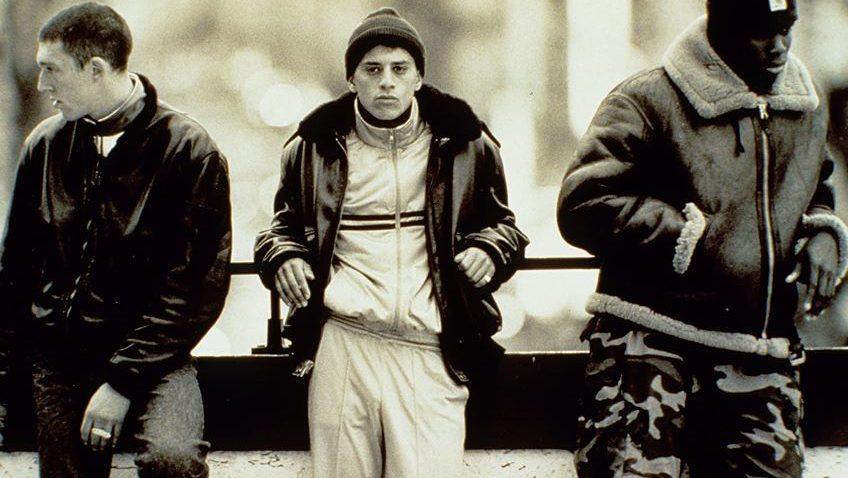 One of the most timely and urgent releases in history

With the international reaction to the death of George Floyd still burning in the headlines, Mathieu Kassovitz’s seminal film, La Haine, could be the timeliest re-release in history. The director was 27 in 1995, when the French Interior Minister, Charles Pasqua, a hard-right populist and defender of the institutionally racist police, created a toxic atmosphere that erupted when a 16-year-old Zairean, Makome Bowole, died mysteriously in police custody. The title, which means “hate” in French was, quite rightly, never translated.

La Haine opens with news footage of riots in Chanteloup-les-Vignes (where most of the film was shot) an immigrant community of tower blocks near Paris. Reports flash across the screen about an incident of police brutality that landed Abdel Ichacha in hospital. The film follows its three central characters, Vinz (Vincent Cassel), who is Jewish; North African Muslim Saïd (Saïd Taghmaoui), and Afro-Caribbean Hubert (Hubert Koundé) over a 20-hour period after the incident. The ethnic mixture might be a contrivance, but it emphasises how diverse groups came together in solidarity against the police.

Vinz has found a police gun that went missing during the riots and, posing as Travis Bickle, swears that he will shoot a cop if Abdel dies. Hubert, a talented boxer whose gym was destroyed in the riots, deals in drugs to help his single mother whose eldest son is already in jail. He tells his mother, “I want out. It’s getting worse” and warns his two friends that “hate breeds hate.” But is it too late?

The film was shot in black and white to enhance its architectural aspect – in one scene, the geometrical tower blocks begin to move in on the characters – and to remove the romanticism from the City of Lights. When Hubert and Vinz accompany Saïd to Paris to collect a debt, their sordid adventures turn the film into a coming-of-age story as we realise that the tough-guy posturing is a survival mechanism masking the boys’ vulnerability.

In one scene, we see that for all his tough talk, Vinz is incapable of killing anyone in cold blood. In another, almost comic scene, they hotwire a car to get home from Paris, only to realise that none of them know how to drive. An amused drunkard (a cameo from the great Vincent Lindon) plays decoy when the police approach. Incidentally, the boys miss the last train home because Saïd and Hubert are arrested on the streets while Vinz manages to run away. They suffer police brutality first hand in a scene that might feel like overkill, but reflects the level of tension in the capital at the time when the police find two young ethnic men wandering the streets late at night.

Perhaps best known for his acting in Amélie, The Fifth Element and Munich, writer-director Mathieu Kassovitz’s directorial debut has become one of the most influential films of the last 25 years, while launching the careers of its three leads. When shown at the Cannes Film Festival, the young director received a standing ovation and the Best Director award. La Haine was compared with Spike Lee’s 1989 film, Do the Right Thing, and sadly, both films are once again topical.