Home / LIFESTYLE / REVIEWS > / FILM REVIEWS / Before Hamilton, Lin-Manuel Miranda was In the Heights 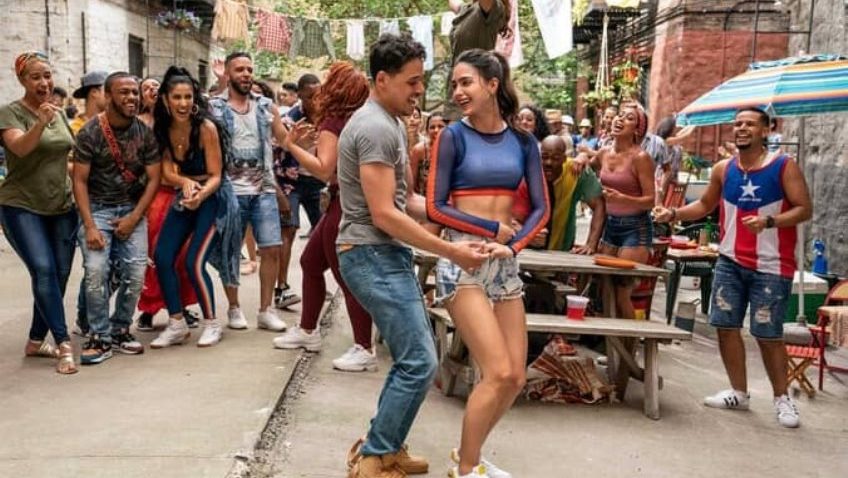 Before Hamilton, Lin-Manuel Miranda was In the Heights

London Mayor Sadiq Khan and Police Commissioner Cressida Dick prick up your ears and prepare your eyes for jubilant dancing and a blend of non-stop hip-hop/rap singing that is far from our gritty streets. We are in another metropolitan melting pot, but there is not a gun or knife in sight; and not a trace of litter, let alone domestic violence. Beautiful girls with impossibly long legs (stars Leslie Grace as Nina and Melissa Barrera as Vanessa) parade in scanty, trendy outfits but there are no wolf whistles let alone sexual assaults. During a blackout there are fireworks not looting.

Welcome to Washington Heights, Manhattan, 1982, or Little Dominican Republic, as seen through the eyes of the talented polymath composer, lyricist, co-producer and singer-actor Lin-Manuel Miranda, who was born there in 1980.

Most of the terrific cast members are under 40. The oldest character, and the best singer, Abuela Claudia (played by 65-year-old Olga Merediz from the Broadway cast) is from Havana, not the Dominican Republic, and she remembers her childhood there where she could see the stars. But take off the rose-tinted glasses and “Mama needs a job; Mama says we’re poor”. One day she says, “Vamos a Nueva York/And Nueva York was far, but Nueva York had work, and so we came.”

In her showstopper, Paciencia y Fe the words, calor, calor, calor, link the old country with the new. “It was hotter at home in La Vibora/The Washington Heights of Havana,” Claudia recalls. The main action takes place over three sweltering summer days with a caption telling us it is 3 days before the black out.

Before Hamilton, In the Heights was a hit on Broadway where Miranda played the starring role of Usnavi de la Vega, so called because the first thing his father saw upon arrival in NYC was a US Navy ship. Now Usnavi is played by the good looking, likeable Anthony Ramos. Miranda plays the Piragua Guy, whose traditional syrup ices are losing out to the Mr Softee truck (Christopher Jackson, who played George Washington in Hamilton) in a rivalry that sorts itself out in a post-credit coda.

A few changes, including a reference to Donald Trump before he was president, and Vanessa Morales’s (Barrera) alcoholic mother have been deleted and a tacky framing mechanism has been added. Usnavi dressed in beachwear sits in what looks like a Dominican Republic beach bar, telling a group of conspicuously adorable kids to say the words Washington Heights “so that it does not disappear.”

There are tensions, to be sure, in fact, quite a menu of them, including the struggle to keep the community together in the face of gentrification. Hair salon owner Daniela (Daphne Rubin-Vega) relocates, while aspiring fashion designer Vanessa struggles to open a shop in trendy downtown. Nina Rosario’s decision to drop out of university rather than combat racism at Ivy League Stanford brings her into conflict with her father (Jimmy Smits). He thinks her straight As should be her weapons and, much to employee Benny’s (Corey Hawkins who played Stokely Carmichael in Spike Lee’s BlacKkKlansman) chagrin, is going to sell his car despatch business to enable Nina to have what he never could.

In a minor box ticking subplot, Usnavi’s undocumented cousin Sonny (Gregory Diaz IV) is in jeopardy. The most drawn-out conflict, however, is Usnavi’s internal tug of war between returning to the Dominican Republic to reclaim a hurricane destroyed beach bar or staying in the Heights to overcome his shyness and tell Vanessa he loves her. Star-crossed lovers Benny and Nina represent other social issues that are systematically worked into the plot, evaporating before they can weigh it down.

For In the Heights wants to be a celebration of community: where Nina, newly returned from Stanford, can “Breathe” (the title of her first song) on the nurturing streets. No one is ever alone. As in Crazy Rich Asian’s director Jon M Chu’s earlier film Step Up: The Streets, crowds congregate to dance in the streets (In the Heights, shot at the intersection of 175th Street and Audubon Avenue) – and just about everywhere. In local offices (Benny’s Dispatch), in Daniela’s hair salon (No Me Diga); in a night club (The Club) in a courtyard (Carnaval del Barrio), on roof tops, Fred Astaire style (When the Sun Goes Down); and at the Highbridge Pool (96,000) where Step Up choreographer Christopher Scott pulls of a vibrant Busby Berkeley number with 500 extras directed with Chu’s trademark subtlety.

Camelot, eat your heart out. Is there a better advertisement for the lottery than the musical number 96,000? That is the amount of money someone has won from a ticket purchased at the shop Usnavi runs with Sonny. The quest to find the winner is a game of elimination. Spoiler alert: Who isn’t swimming that day? In the song’s aftermath no one seems to care who won the money and, this being America, it goes to an immigration lawyer (Mateo Gomez) who takes lottery tickets in lieu of cash.

The miracle is that wordsmith Miranda can sustain the rhymes, many very clever, and cover the various plots and characterisations over two-and-a-half hours, although taking it all in is heavy going. The singers are so good that they help hide the fact that Quiara Alegría Hudes’ script is a tad superficial and clichéd.

Certainly, a wholesome look at youth culture in an ethnically diverse neighbourhood is refreshing, but for all its authenticity, the neighbourhood never seems real. Despite the high energy, many of the musical numbers look flat and stagey. The scenes never flow and geographically, you never figure out where the pool is in relation to, say, the Rosario’s flat, or the bodega. No one walks to get anywhere: they just suddenly appear, transported to a new location for a new set piece.

Another movie about social and racial tension, gentrification, local businesses, youth and community during a sweltering summer in 1980’s New York, is Spike Lee’s 1989 Do the Right Thing. It lacks Miranda’s hip-hop/rap but is nothing if not operatic. The streets and the characters sizzle with drama and the tension is palpable. It is this tension which In The Heights lacks in an almost episodic structure with no discernible cause and effect. Lee’s film has humour and likeable characters, but it also has ethical dilemmas that resonate and drive the plot. Lee’s Brooklyn is far from sweetness and light, but it is a more interesting place than Washington Heights.