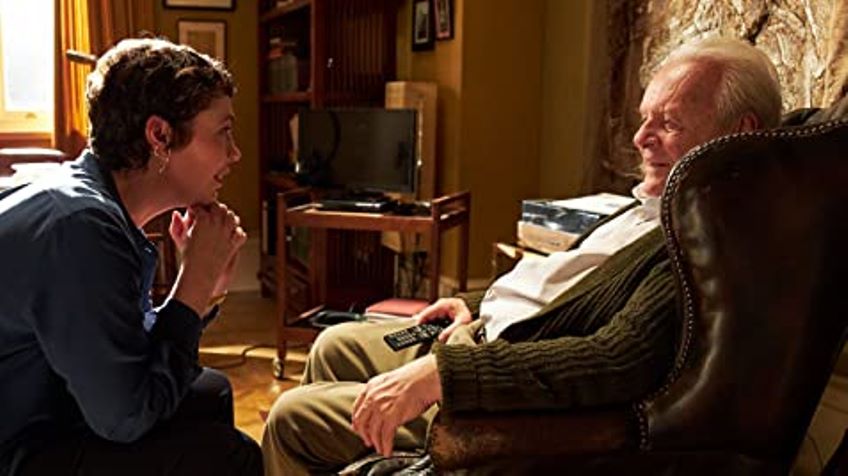 Adapting a predominantly single location play with little plot or action and no subplots for the screen would seem risky enough, but Florian Zeller’s award-winning 2012 play Le Père, seems an even more unlikely candidate. The French playwright has never directed a film and his script is written from the point-of-view of a British octogenarian suffering from advanced dementia. That said, when that octogenarian is played by Academy Award winning Anthony Hopkins; his long-suffering carer daughter is Academy Award winning Olivia Colman; and Zeller, with Christopher Hampton, has written the script, the odds look much better.

The Father does not just beat the odds, it is a triumph. And part of the reason is that Zeller, who failed to better The Father with the derivative stage play, The Height of the Storm in 2018, turns out to be natural-born filmmaker. More than an adaptation, with The Father, Zeller has used the film medium to conceive a way to put us in the place of both the carer/family and the Alzheimer’s sufferer.

Anthony (Zeller wrote the role with Hopkins in mind) still shows glimmers of the playful, opera-loving, proud and stubbornly independent engineer he was. But he still believes he is living in the family home and his divorced daughter, Anne (Colman), has moved back in with him with the excuse that he needs looking after. He is adamant he does not need looking after and resents the annoying carers Anne saddles him with.

Is he right? Despite Anthony’s assuredness and physical fitness, we are not kept guessing long.

Routine suits Anthony as does familiarity. When he and Anne are alone, his tenderness, appreciation and vulnerability come through and he almost seem to be having a conversation. But Anthony can turn belligerent on a penny when confronted with anything destabilising or threatening.

Threatening are the patronising carers, and the men in Anne’s life, including a nameless presence in the flat (Mark Gatiss, who reappears as a care home nurse) and Paul (Rufus Sewall). We cannot tell which of the two is the former husband, and Anthony is no help. He views them both as hostile, and they appear so to us.

It is interesting that the men are portrayed as being far less understanding and patient than the women (Anne, two carers and a care home nurse) in the film. In fact, Paul makes it clear that he resents the toll Anthony is taking on Anne and on their lives as a couple. Anne is torn between her private life and a sense of responsibility for her frequently abusive father, who still longs for his “favourite daughter”, Lisa, to return after so many years from her travels abroad.

The main action is triggered by Anne’s announcement that she is going to Paris to live with her new boyfriend and take a job there. This can only mean one thing: a care home. But we are not there yet. The interview with yet another carer, Laura (the excellent Imogen Poots), in a last-ditch attempt to keep Anthony from being institutionalised.

To Anne’s relief, Anthony puts on a show to impress Laura whom he sees as Lisa. When Laura exclaims, “he’s charming”, Anne warns her, “not always”. The following morning when Laura (this time played by Olivia Williams, who is also the care home nurse) turns up to start work, Anthony feels he has been deceived and storms out of the room.

Zeller manipulates time like Christopher Nolan, only better. We are never certain where in the objective, actual sequence of events we are. The script gives us a few clues, but not many.

Aided by Yorgos Lamprimos’ editing, and clever production and set design by Peter Francis and Cathy Featherstone respectively, we notice the almost imperceptible changes in the décor (the kitchen tiles, a painting by Lisa over the fireplace) as we, and Anthony, time travel from his apartment to Anne’s, where he is now living. Like Anthony, we are never really sure what is going on as we are experiencing (and that is the operative word) life from Anthony’s perspective where memory, place and people collide and merge outside of real time.

It will be difficult for any director to match Zeller’s immersive experience: his ability to disorientate the audience without disengaging us. Zeller’s only false step is the maudlin ending which, given Hopkins’ resounding ability to convey an entire range of emotions in one gesture, is overkill. We know exactly what he is feeling before the script wants to tell us. This is the one instance where Zeller has underestimated the power of the actor for whom he wrote the script. If you want to see a career best, Academy Awarding winning performance from an 83-year-old filmstar, see The Father.