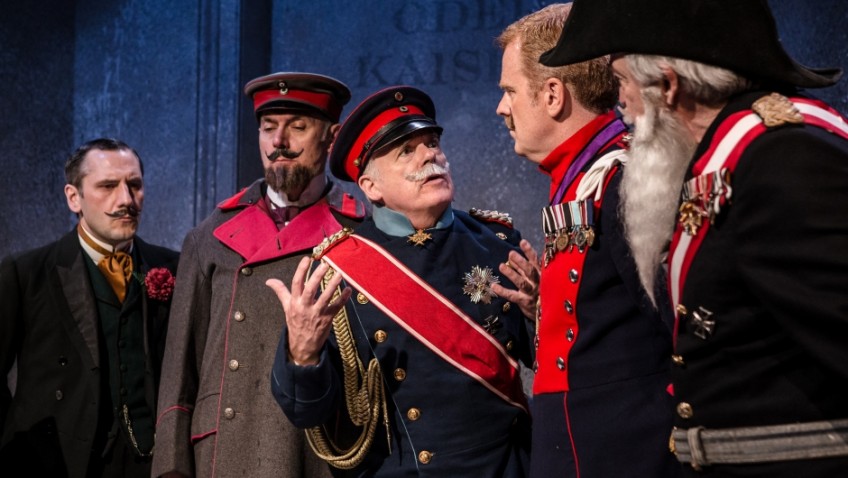 The action, which is seen from a German perspective, takes place on the Isle of the Dead (No-Man’s Land) and there are flashbacks to key events in Vienna, Berlin, and Sarajevo. The alliances aimed at preventing war were in the end the cause of 9 million dead.

Even Death is revolted. “I won’t,” he says, “give my name to mass murder by heavy industry….  The ones who deserve to die are those who sent them to fight and profited from the chaos and claimed they were in the right.”

Hochhuth had wanted Death to appear naked or in a black cloak riding his centaur, Nessus. Director Christopher Loscher has Death as a dead young German soldier, a Brechtian figure, and a relation to the Emcee in Cabaret.

The text, 210 dense pages, is a mixture of dialogue, lengthy stage directions, commentary and extended quotes from ministers, diplomats and historians.

Hochhuth’s massive epic would benefit from a full-scale spectacular production with band, newsreels, puppetry, dance and huge sets, such as only the National Theatre and the RSC could possibly afford.

Loscher’s production at the Finborough, is, inevitably, more modest, more intimate, concentrating on the dialogue and even here the text has been ruthless cut.

In a large cast, most actors playing three roles, Dean Bray as Death, Tim Faulkner as Kaiser Wilhelm and Peter Cadden as von Moltke stand out.