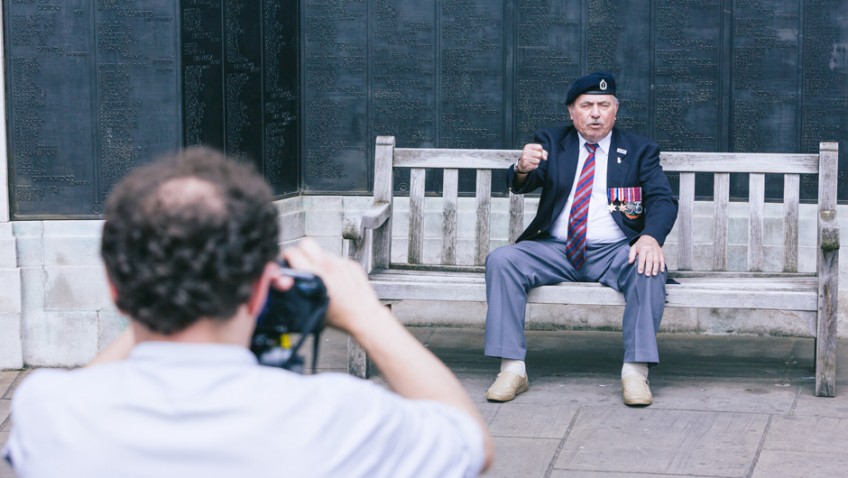 D-Day veteran Bill Aitkenhead, who is 88 and from Bromley has starred in a video to launch a new recording of the hit marching song ‘Pack Up Your Troubles’ for the national military charity SSAFA.  The updated version has been made to mark the commemoration of the centenary of WWI and has the support of the song’s composer’s grandson and the Military Wives Choirs.

Bill, who served in all three Services and has been a volunteer for SSAFA for over 20 years, is now appearing in the charity video along with a cast of TV celebrities, veterans, serving personnel and young cadets. The charity hopes the video will become a viral sensation and work its way into the hearts and minds of the public in the same way it did during World War One.

SSAFA, which was the only national military charity in existence when war was declared in 1914, has been able to record the song thanks to the blessing of Aubrey Powell, the original composer’s grandson. Aubrey also stars in the film, alongside those who have benefited from SSAFA’s support, as well as the Ghurkas and a host of famous faces, including Alan Titchmarsh, former soldier and X Factor contestant Jonjo Kerr and vocal group Blake.

Bill comments: “Being involved in the charity video was great fun and a real honour but it is important that we remember that the troops involved in WWI and their families suffered terribly during the conflict.  What’s even more important is that then, as now, SSAFA did a lot to help.”

The composer’s grandson Aubrey Powell says: “I was delighted to help give SSAFA the opportunity to create a new recording of the song, which has been hailed by many as the viral hit of World War One. My great uncle declared the tune ‘piffle’ when my grandfather first played it to him, but Pack Up Your Troubles became one of the defining songs of the 20th Century and it’s great to be part of its resurgence 100 years on. The support SSAFA continues to offer to those who are serving, and those who have served, as well as their families, is as vital today as it was back then, so I’m glad they will benefit from the song’s enduring popularity.”

Kirsty Bushell, Vice National Chair of SSAFA, says: “We were thrilled when Aubrey gave us his blessing to record the song for the WWI Centenary. It’s been a great way to bring everyone together – those we’ve supported through difficult times, and those who support us in providing that help. When War was declared in 1914, SSAFA was the only organisation delivering help to the families of those going off to fight. We were there for them then, and we’re still here for them now. The words of this incredibly famous song remind us of how resilient people are, and that even in the darkest of times we still find the ability to ‘smile, smile, smile.’ We hope this film will help people to do just that.”