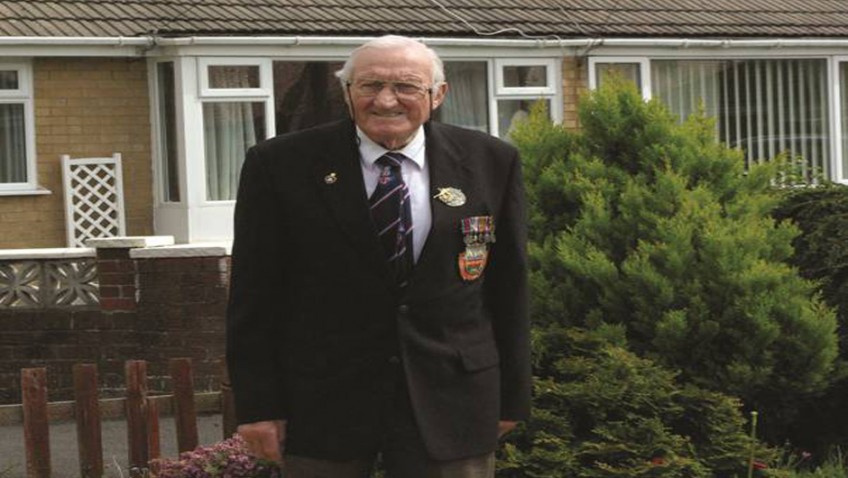 A 94-year-old blind veteran from Lancashire who landed in Normandy on D-Day 70 years ago has thanked a national charity for helping him to live independently with sight loss.

Ahead of the 70th anniversary of D-Day, Morecambe resident Philip Broomhead said he felt “very well looked after” by Blind Veterans UK, the national charity for vision impaired ex-Service men and women.

Philip joined the Territorial Army in April 1939, just a few months before the outbreak of the War. He says: “I just had a feeling that the War was coming and that I was about the age that would be called up to fight. I thought, ‘If I’m going to have to join the Army anyway, I may as well volunteer.’

“My time in the Army was very enjoyable on the whole – looking back, there were times when I was a bit nervous about what might happen, but it was still a very worthwhile experience.”

Philip says: “Had Hitler got hold of Iceland, he probably would have used it as a base for bombers or submarines to attack the Atlantic convoys between America and Britain, so we were stationed there to make sure that never happened.”

Following two years in Iceland, Philip’s regiment returned to the UK to prepare for Operation Overlord – the liberation of France from occupying German forces. On June 6th, 1944, Philip joined thousands of young men on the D-Day landing crafts and recalls being given a tot of rum by the captain of his landing vessel, just before arriving in Normandy.

Philip landed on Gold Beach, one of the five beachheads selected by Allied forces as landing stages for the main invasion force. Upon landing, Philip followed a Sherman tank onto the beach: “The tank went ahead with flails to detonate mines planted by the Germans, but there was one explosion which destroyed its traction completely, and we had to swap over to follow one of the other vehicles.

“It was quite a straightforward landing, but the beach got very congested by tanks!”

Philip suffers from macular degeneration, a degenerative condition which has slowly robbed him of his sight. Now, 70 years on from D-Day, he is receiving free and comprehensive support from Blind Veterans UK to help him live independently with sight loss.

Philip says: “I feel very well looked after by Blind Veterans UK. The lighting in my home wasn’t very good and was making it very difficult to move around the house with my sight problems – the charity has helped me pay to replace it.”

In October 2012 Blind Veterans UK launched its No One Alone campaign – the charity estimates that there are 68,000 plus blind veterans who, like Philip, are eligible for the charity’s services but are not currently aware of this. If you know someone who served in the Armed Forces or did National Service and are now battling severe sight problems, Blind Veterans UK may be able to provide them and their family with a lifetime’s practical and emotional support for free.