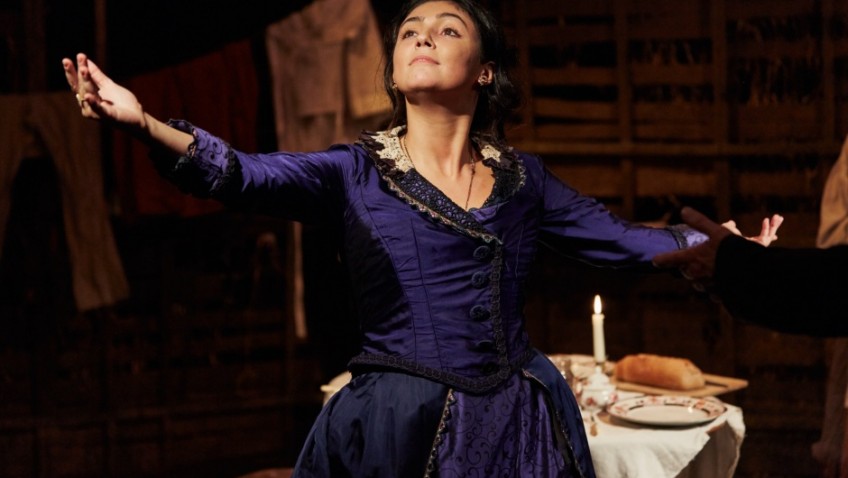 It isn’t often you get a chance to see a Yiddish play by a Yiddish writer. The Russian born David Pinski (1872-1959), who spent most of his life in America, wrote 18 plays as well as novels and short stories.

Treasure, written between 1902 and 1906, and probably his best work, is a satire on greed and feels at times like a farce by Gogol. The characters are money-grabbing thieves, scavengers and hypocrites.

A young man (Sid Sagar), a half-wit and cripple, buries his dog and whilst doing so finds gold. He gives the sovereigns to his sister (Olivia Bernstone) who goes on a spending spree. She buys fine clothes and expensive jewellery, and then spreads a rumour that she is a millionaire. She hopes to be able to buy herself a handsome husband with such a dowry.

I wonder what Max Reinhardt did with the play when he directed it in German in Berlin in 1910. I bet, for a start, that he had a bigger space than Alice Malin does for her production at the Finborough. The comedy begins small with just a family of four. But as it goes on the cast gets bigger and bigger until there are 22 actors on the tiny stage, playing marriage brokers, charity workers, lawyers, teachers, pregnant women, etc, etc, who are all anxious to get their hands on the money.

Once the action moves to the cemetery and the cast starts digging up and desecrating the graves, Malin is completely out of her depth as how to stage it and cope with the sheer number of actors.

Similarly, the final scene, with the disturbed souls of the dead rising out of the ground, does not get either the spectacular or the mystical interpretation than it needs if it is to work