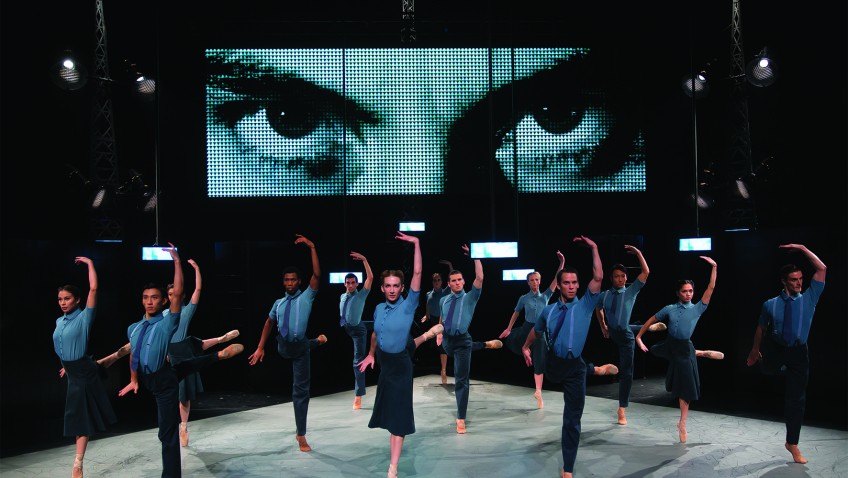 Big Brother is watching you

When it comes to gripping drama, coupled with exhilarating, creative originality, Northern Ballet is hard to beat. The Taglioni Award, after all, proclaimed it Europe’s Best Dancing Company.

When, into the bargain, choreographer Jonathan Watkins collaborates with composer Alex Baranowski, the resultant magic truly takes the breath away.

Onstage we behold 1984’s gloomy Big Brother dystopia, first envisaged by George Orwell in his best-selling 1940’s novel, where blue-grey ranks of synchronized, machine-like workers spend their regimented lives toiling at bland, functional workstations, stripped of all rights to individuality, privacy or emotional interaction, and where everyone is a potential spy or informer.

The oppressive mood engages immediately, courtesy of the entire ensemble’s commitment and involvement, their prescribed movements repetitive yet full of graceful flow and beauty.

As the giant onscreen eyes of Big Brother look on, relentlessly monitoring their every move and thought, the aggressive, brutal brightness of the various intrusive, omnipresent screens assaults us as well as them. And here begins the doomed, forbidden romance of Winston Smith and Julia.

From the outset, the mesmerising momentum of Baranowski’s magnificent music grabs us up to carry us through to the bitter, chilling end, never once loosening its grip. The richness and breadth of tone and texture never cease to excite and amaze.

Shimmering strings subtly deploy with a mighty array of percussion to push and pulse rhythmically on, a clang of soviet-style industry adding to the mix; glorious strains and plaintive melodies pour, in turn, from bassoon, oboe, flute, clarinet, horns, harp, cello and brass, enhancing and integrating perfectly with chorography and mood, proper discord and disharmony reserved for the tense, terrible finale.

Baranowski’s desire to create a rich tapestry for ears as much as for eyes is certainly realised, while the urgency and energy of music and movement blend wonderfully together. Live orchestra is vital, and it’s bravissimo all the way for The Northern Ballet Sinfonia under the baton of John Pryce Jones.

The choreography, too, is mesmerising, pulling the audience right inside this nightmare world. As Winston and Julia (danced to great effect by first soloists Giuliano Contadini and Antoinette Brooks-Daw), embark on an illicit love affair in the seedy, unmonitored (so they think), orange-lit, twilight world of the Proles, they are freed temporarily from the stifling straitjacket of surveillance and, casting aside restrictive clothing, they finally allow human passion to take over.

Tension builds as, spied upon and denounced by treacherous Inner Party member O’Brien – danced with unfeeling authority (and a red-tie) by Javier Torres – Winston is subjected to fast and furious onslaughts of violence, brainwashing and torture that culminate in rat-infested Room 101.

Northern Ballet’s chilling nightmare of betrayal and defeat in a life deprived of privacy, feeling and humanity, is particularly disturbing and thought provoking in view of some of our own society’s projected advances in technology. Yet, paradoxically, throughout the entire evening, we’re held in an artistic Heaven we’re reluctant to leave.

1984 tours on to Edinburgh, Milton Keynes, Southampton and London Sadler’s Wells between now and May 2016, interspersed with other productions elsewhere.