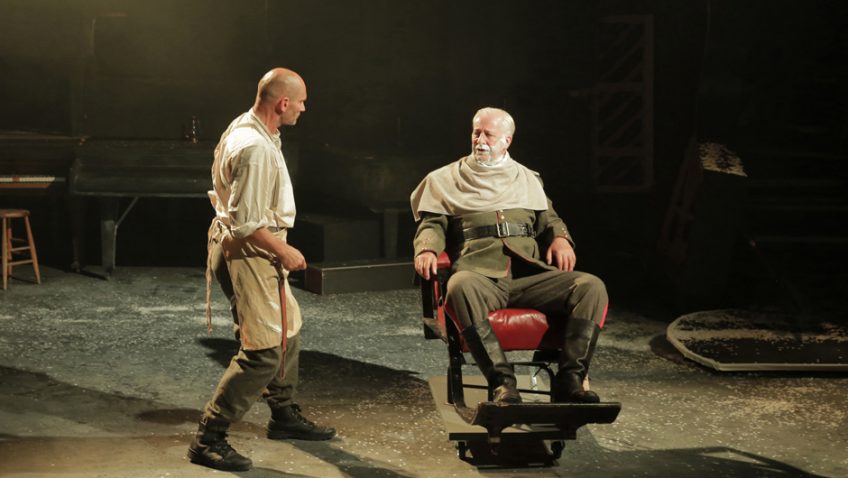 Woyzeck in Winter is a fusion of Georg Büchner’s play and Franz Schubert’s song cycle, Winterreise. It is something director Conall Morrison has wanted to do for a long time.

Woyzeck, written in 1837, is often regarded as the first modern play and forerunner of the social dramas of the 19th century. There is no definitive text. There are just fragments of paper. Camille O’Sullivan in Woyzeck in Winter

Büchner was in the middle of writing it when he died of typhoid. He was only 23. The play was not performed on any stage until 1913.

The brutal, cruel and deeply unsettling story was based on a real-life murder case and written in a series of short and sharp scenes. It’s a radical work, both realistic and expressionistic, an indictment of society’s attitude to the working classes and the mentally ill.

Woyzeck is an Austrian soldier on the bottom rung of the social ladder. Degraded and tormented by everybody, he finally cracks and murders his unfaithful common-law wife.

I have seen a number of productions, the most notable being Alban Berg’s 1925 opera, Werner Herzog’s 1978 film with Klaus Kinski, and a crazy, off-the-wall music-theatre by the legendary avant-garde American director Robert Wilson with a wonderful score by Tom Waits.

Schubert’s songs, sad and plaintive, building to a shattering climax, were based on Wilhelm Müller’s romantic narrative poem, Winterreise.

Schubert died of syphilis in 1827 whilst still correcting his song cycle. He was only 31 years old. Müller also died young of a heart attack in 1827. He was only 32.

Morrison’s production for Landmark Productions, designed by Jamie Vartan and lasting 1 hour and 45 minutes straight through, had its premiere at the Galway International Arts Festival a couple of months ago. The English lyrics are by Stephen Clark.

The stage is dark and bleak. Snow falls. There is a mountain of broken pianos. A Hurdy-Gurdy man (Rosaleen Linehan) sings. Woyzeck and the Hurdy-Gurdy Man, two parallel tortured souls, are driven crazy and into an abyss.

There is a terrific performance by Patrick O’Kane as the haunted-looking, doomed Woyzeck. There is strong support by Barry McGovern as the doctor who uses him as a guinea-pig and by Peter Coonan as the buffoonish Drum Major who seduces his wife, played by Camille O’Sullivan.