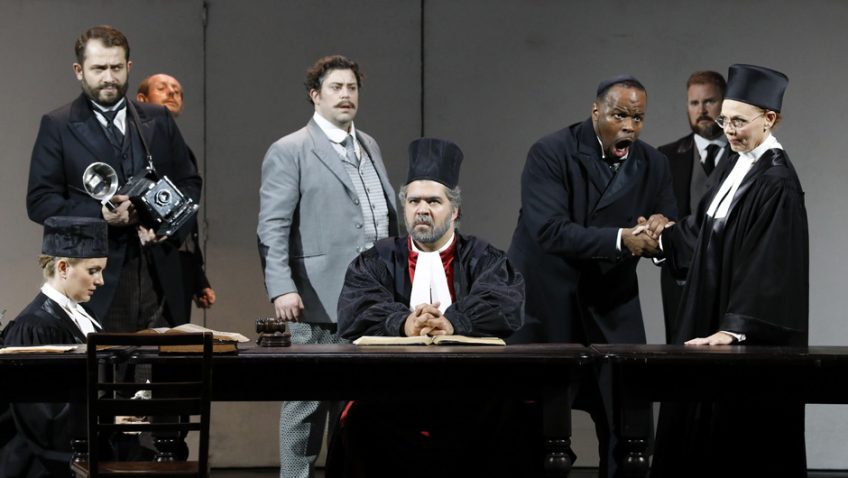 Shakespeare’s play is one of his most accessible but it has lost its popular appeal since the Holocaust. At the very first performances in 1605 Shylock was played as a comic villain. Charles Macklin in 1741 was the first actor to take him seriously. Edmund Kean in 1814 was the first to treat him with compassion. Henry Irving in 1878 was the first to make him tragic.

Shylock exacts a terrible revenge when Antonio is bankrupt and cannot pay the 3,000 ducats he owes. But if Shylock is obdurate, malicious and cruel, it is because the Christians, blatantly anti-Semitic, have taught him, over many years of humiliation, to be so. He merely reciprocates the villainy they have shown him. Lester Lynch in The Merchant of Venice

Welsh National Opera has brought Andre Tchaikowsky’s opera to London. The conductor is Lionel Friend. I enjoyed the music, very Alban Berg, very Benjamin Britten, and the singing, more than I did the production.

Tchaikowsky, a Polish Jew, escaped from the Warsaw Ghetto during World War 2 and came to England. Born in 1935, he died in 1982 shortly after he had completed the opera and it had been rejected by English National Opera.

Keith Warner’s production, which premiered at Bregenz Festival in 2013, opens with Antonio on a psychiatrist coach which makes you think that Antonio is going to be the leading role. He is, after all, the Merchant of Venice, not Shylock.

But Counter tenor Martin Wölfel is so dreary, he makes no impact whatsoever and he sings so quietly as to be almost inaudible from the back of the stalls.

The casting of African American Lester Lynch gives Shylock an instant impact. The most famous speech, “Hath not a Jew eyes?” has been transferred to the trial to good effect. Lester has the weight and power, though things get a bit ridiculous when he dons an enormous pair of yellow gardening gloves to cut his pound of flesh.

Shylock drops down dead at the end of the trial and his ghost stalks the lovers in the final scene, an interesting idea which is not properly developed.

Warner’s production keeps the stage-hands very busy. The scenes in Belmont are played for operetta farce. There are three large ugly office safes (with caskets inside) and a maze for the Prince of Aragon and the Prince of Morocco and everybody else of to get lost in. Marlene Dietrich in top hat and tails, all in white, puts in an appearance.

Portia and Nerissa behave as if they are lovers. Now why on earth would Portia want to marry a shallow, immature, bankrupt gay sponge like Bassanio who only loves her for her money when she could marry Nerissa?

You may be interested to know that Andre Tchaikowsky left his skull to the RSC for use in the gravediggers’ scene in Hamlet. David Tennant used the skull when he played Hamlet.