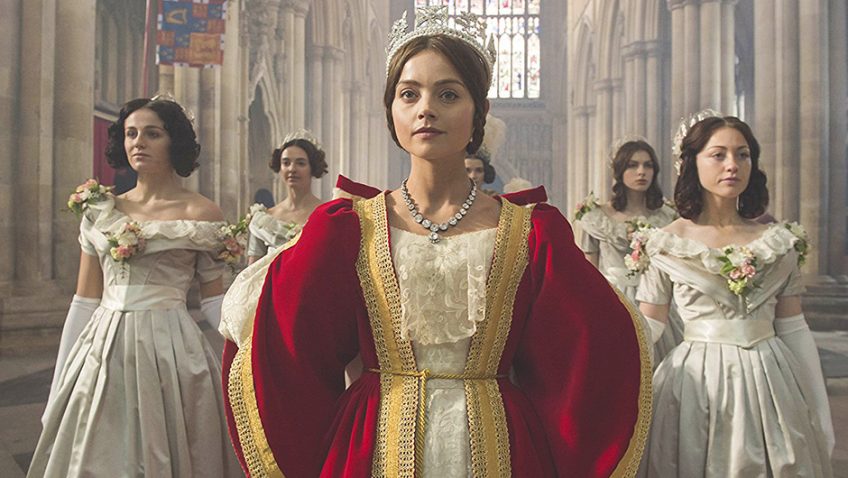 Victoria The Complete Series One & Series Two (ITV) is very enjoyable costume drama with handsome sets, pretty scenery, lots of good actors and concentrating on the early reign of the young queen (1836-1846). Jenna Coleman is good casting for Victoria, catching the iron-will, the stubbornness, the impulsiveness and the passion for Albert. (Protocol demands that she does the proposing.) Tom Hughes is Albert, strong-willed, independent, fighting not to be emasculated and horror-struck to learn he is or might be illegitimate.

The relationship between Victoria and Prime Minister Lord Melbourne (Rufus Sewell, excellent) is the production’s strong point. It is Melbourne, friend, protector, advisor, father-figure, who teaches her how to be queen. Nigel Lindsay does good work as Sir Robert Peel. Paul Rhys is the queen’s uncle, a right villain. Diana Rigg has the Maggie Smith role of Duchess.

It is not always historically accurate. There is one blatant episode when the royal couple get lost in the Scottish highlands and seek shelter in a crofter’s house. There are also rather too many sub-plots downstairs and upstairs as if the series was competing with Downton Abbey.

Kills on Wheels (Eureka) is a brutal Hungarian crime story directed by Attila Till with a cast of paraplegics. Two young men, one with a spinal problem, the other suffering from cerebral palsy (acted by non professional actors, Zoltán Fenyvesi and Ádám Fekete) live in a rehab centre where they are working on a graphic crime novel. Another inmate (Szabolcs Thuróczy), is a hit-man just out of prison and in a wheelchair and paralysed from the waist down. He invites them to become his partners in a killing spree which includes dealing with a pack of Rottweilers. The big question is can the public tell the difference between comic book fantasy violence and the real thing? Either way the film is pretty nasty.