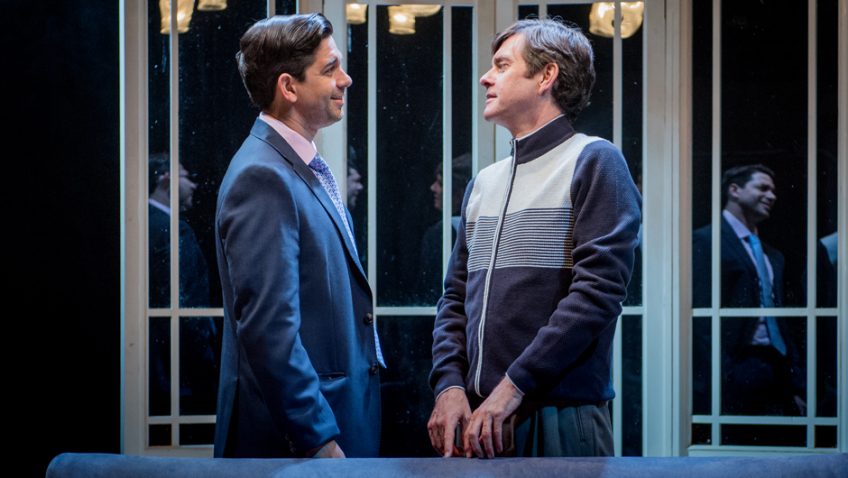 Kevin Elyot (1951-2014) is the author of one of the very best gay plays, My Night with Reg, which had a successful revival a couple of years ago.

Twilight Song, written during a long illness, now gets its posthumous premiere, directed by Anthony Banks. It’s a very short play, 75 minutes, and feels like Eylot never got round to finishing it properly before he died. Blasts of classical music are used to rev up the emotion.

Elyot observes a number of open and covert relationships over 50 years. The action is set over a series of summer evenings in the 1960s and present day.

Things change over time. The way people behave is odd. Isn’t it? It used to be funerals all the time, then civil partnerships, now it’s divorces.

In the first scene, set today, a middle-aged man (Paul Higgins), still living with his mother, has sex with a estate agent (Adam Garcia, very cocky) who, outside of office hours, services the older market, charging a hefty price.

In the second scene, set in the 1960s, Higgins plays his father who is just about to become a dad. His gay uncle (Hugh Ross) and his uncle’s partner (Philip Bretherton), a solicitor of some standing and in the closet, pay a visit.

Ross talking about the kitchen-sink drama he loathes and remembering walking out of Hitchcock’s Psycho is very funny.

Twilight Song is about people knowing what they want and then finding life has dished up something quite different.

One woman (Bryony Hannah) never thought she would end up a wife and a mother, married to man she hates and having a son she despises. She wanted to go to university and be an engineer but her father wouldn’t let her.

A gardener (Adam Garcia, very cocky again) spells out 62-year-old Elyot’s dying message: “I think you should take what you want when you want… It’s over in a minute; there is no time to fanny around. So better make the most of it.”