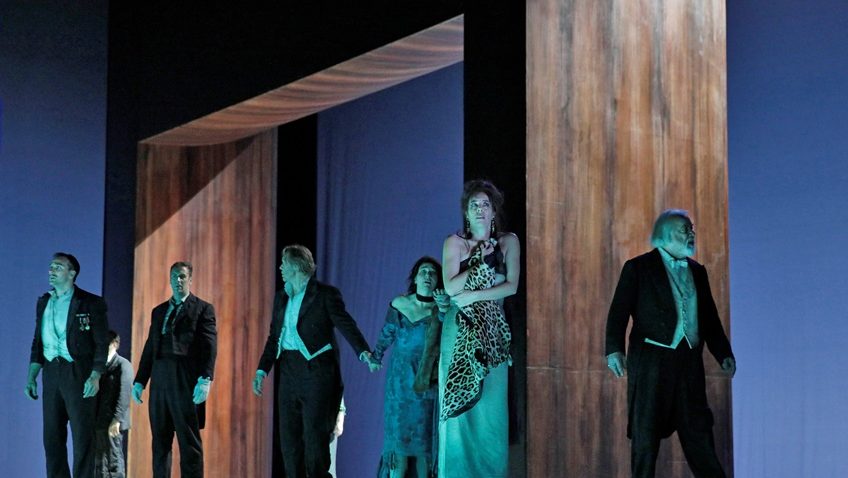 Fourteen rich people, attending a lavish dinner party, find themselves trapped in a room, unable to leave and nobody is allowed in. They are quarantined by the army. Starved for food and water, they feel they are dying. Death would be preferable to their present circumstances.

There will be many people, who will think watching The Exterminating Angel during a pandemic and lockdown is not a good idea, finding it too close for comfort.

Thomas Adès’s opera, based on Luis Bunuel’s 1962 film of the same name, was seen in New York in 2017, following productions in Salzburg and London.

The libretto, by Adès and Tom Cairns, is a satire on the bourgeoisie, a lethargic and amoral elite, into drug addiction and incest, who molest, abuse, fight and murder each other.

Audiences will wonder what is going on and what it all means? It’s so surreal, it’s so obscure, so absurd, so irrational, so perverted. It’s black comedy at its blackest.

Three sheep and a bear put in an appearance. Bunuel aficionados will be in high heaven. Actually, they will be in hell. Hell, as Jean-Paul Sartre said in Huis Clos, is other people.

The nastiest moment is when one of the guests recalls a dream of a train crash and a third-class carriage ending up looking like a concertina. She said the death of common people did not affect her one bit.

The opera is vocally and dramatically challenging and riveting. The singers never leave the stage. The music, harsh and dissonant, eerie and tender, hits all the high notes and scores the anarchy and panic. The unconventional instruments include the electronic ondes martenot.

Adès conducts. Cairns directs an excellent ensemble which includes Audrey Luna, who sings an A above high C, and David Tomlinson as an unreliable doctor.