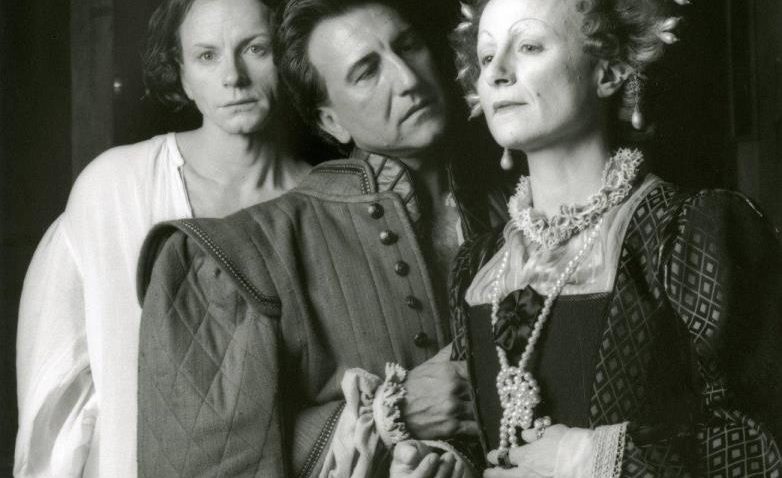 Timothy Findley’s Elizabeth Rex is an Elizabethan backstage story about theatre, sexual identity, disguise, love and death. I much enjoyed the play when I saw it on stage at Festival Theatre in Stratford, Ontario, Canada, in 2000. Watching it again, for the first time in 20 years, I wonder why it has never been acted in the UK.

Martha Henry’s production was filmed in 2003 and it is this version which Stratford Festival is streaming. There have been cuts. I much missed the bear. But the play’s essence is preserved and so, too, are two memorable performances.

The action takes place in 1601 in the royal stables after a royal command performance by the Lord Chamberlain’s Men of Shakespeare’s Much Ado About Nothing.

Queen Elizabeth had hoped the play would take her mind off the execution of her 35-year-old lover, the Earl of Essex, for treason the following morning.

The Queen comes backstage to talk with the actors. She is particularly interested in Ned Lowenscroft, who is considered the greatest portrayer of women in his day when all female roles were played by boys and young men.

Ever since Elizabeth had come to the throne, she had to rule as a king (hence Findley’s title for his play). She has had to repress her femininity. Wishing she had the capacity for womanhood, she strikes a bargain with Ned that, if he will teach her how to be a woman, she will teach him how to be a man.

Ned Lowenscroft, born in the gutter, a bitter, petulant, wilful, self-centred, self-pitying, self-destructive actor, is dying of syphilis which he had contracted from an English captain he loved and who had died in Ireland in the wars.

Brent Carver (who had appeared in London in the musical, Kiss of the Spider Woman to great acclaim) gives a remarkable performance of this doomed fictional character, blanched-faced, fey, drunken and pox-ridden, his body is covered with running sores.

Diane D’Aquila looks extraordinarily like the portrait of the Queen painted by Marcus Gheeraerts in 1595 when she was 62 and ravaged by age. Physically imposing, D’Aquila, her face painted white, cuts an imperious figure in her bejewelled red wig and in her Gloriana dress with its ruff, collar and rope of pearls.

When it comes to convincing Elizabethan back-stage stories, Timothy Findley’s Elizabeth Rex can confidently stand in the same league as Tom Stoppard’s Shakespeare in Love and Nicholas Wright’s Cressida.

The Festival Theatre, Stratford, Ontario, Canada, continues to stream their productions into December.

Please note, because of the time difference between Canada and Britain, the time to watch the productions in the UK for free will be on Fridays. If you pay a subscription fee you can have access to The Festival’s huge archive at any time. The timetable for the showings are as follows:

You can find out more by clicking here.