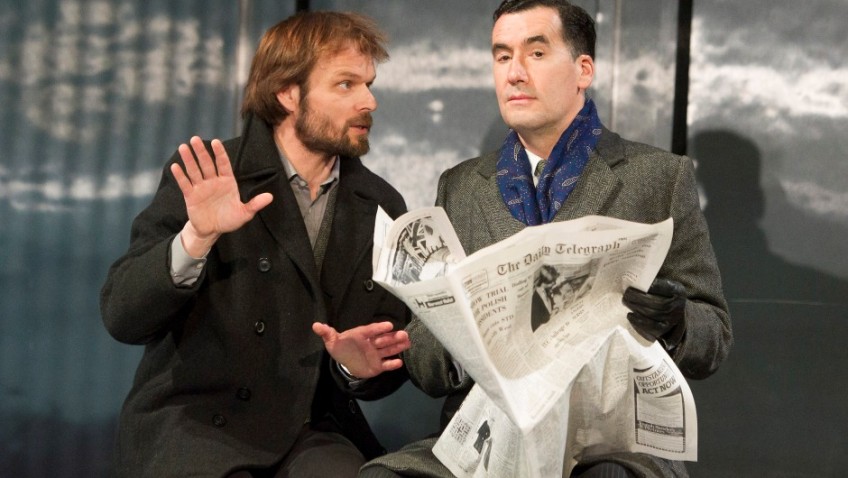 “I wanted Hapgood to be light on its feet,” said Tom Stoppard, “an entertainment, with some science in it.”

“You have written a brilliant but elitist play,” said Nigel Hawthorne when he was appearing in the original West End production in 1988.

Despite a generally unfavourable press it still ran for six months. But audiences found it too complicated and too confusing. Not surprisingly, Hapgood hasn’t had a London revival since then. Stoppard rewrote it for its New York premiere in 1994 and he has tinkered with it again for the Hampstead revival. It’s still complicated and confusing.  It could be argued that Stoppard is intentionally obscure.

The play, a metaphysical spy thriller, was written when the Cold War was still on. It’s not so much a “who done it?” as a “how did they do it?”

It opens in the changing room of a municipal swimming-bath with a number of spies, all carrying briefcases, entering and exiting the cubicles and switching the suitcases. Hapgood is a woman and she is head of British Intelligence and her main business is forwarding misinformation to the Russians.

The Russians make things even more confusing by using twins as agents.

The revival benefits from Howard Davies’s slick production. The performances by Lisa Dillon as Hapgood and Tim McMullan as her boss are particularly persuasive.

Alec Newman is charming as a Russian double agent who freely admits that he can’t remember which side he is working for and that it is not necessary for him to know.

Tom Stoppard’s best play about the Cold War remains Professional Foul, which he wrote for television and was broadcast by the BBC in 1977.