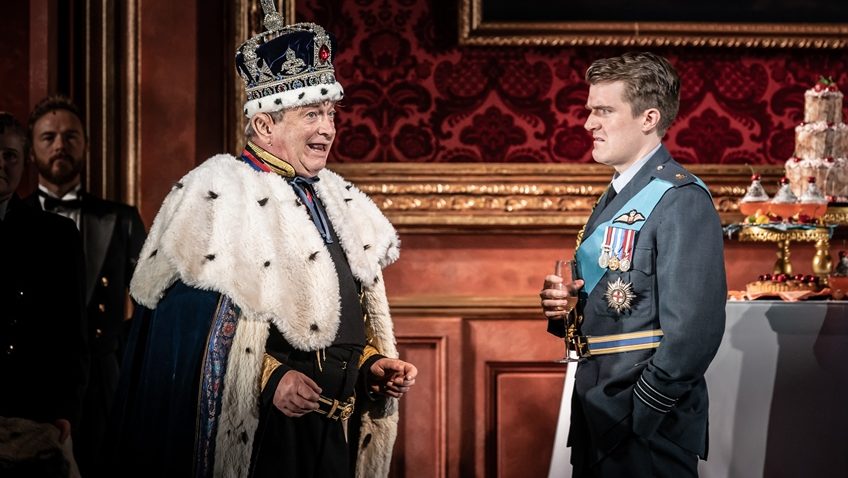 Robert Tanitch reviews The Windsors Endgame at The Prince of Wales Theatre, London

How singularly appropriate that The Prince of Wales should be performing at The Prince of Wales Theatre. Lampooning royalty has been going on for years. It began with Thomas Gillray and Andrew Cruikshank in the 18th century and Gerald Scarfe and Spitting Image maintained the vicious standard in the 20th century.

The Windsors Endgame, written by George Jeffrie and Bert Tyler-Moore, is not in the same league as Mike Bartlett’s witty and well-written King Charles III; and nor is it meant to be. It’s not a play. It’s a soap opera turned into a pantomime, farcical, rude, crude, outrageous, very silly and in the worst possible taste. Sounds good

The show is aimed at TV audiences but, sadly, it’s not nearly as good and not nearly as polished, and not nearly as well cast, as the original TV series. The script runs on vulgar gags. The audience is encouraged to boo Camilla and vote loudly for a constitutional monarchy.

Directed by Michael Fentiman, it feels like a production you might see performed by undergraduates at university. It’s rushed and tacky and feels like a stop-gap until The Book of Mormon returns to The Prince of Wales Theatre. The actors on TV had three series to develop their individual impacts. The stage actors have to rely on the audience having seen the TV series.

The Queen has abdicated in favour of Charles who wants to be absolute monarch. Camilla wants a feudal state. Wills and Kate favour a constitutional monarchy. Harry and Meghan come back from America. Harry and Kate have sex. Wills and Meghan have sex. All four royals have sex in a tent. Meanwhile, Beatrice and Eugenie (they with exaggeratedly extended posh vowel sounds) are preoccupied with saving daddy Andrew’s reputation.

Only four of the original cast remain. Pippa Middleton is much missed. Tom Durant-Pritchard as Harry is fortunately still with us. Harry Enfield recreates Charles. Unfortunately, the role is much diminished. Enfield is off-stage for too long. He wanders around dressed up as Henry VIII. His best gag comes during the curtain call when he successfully persuades the audience to stand up and bow to the cast.