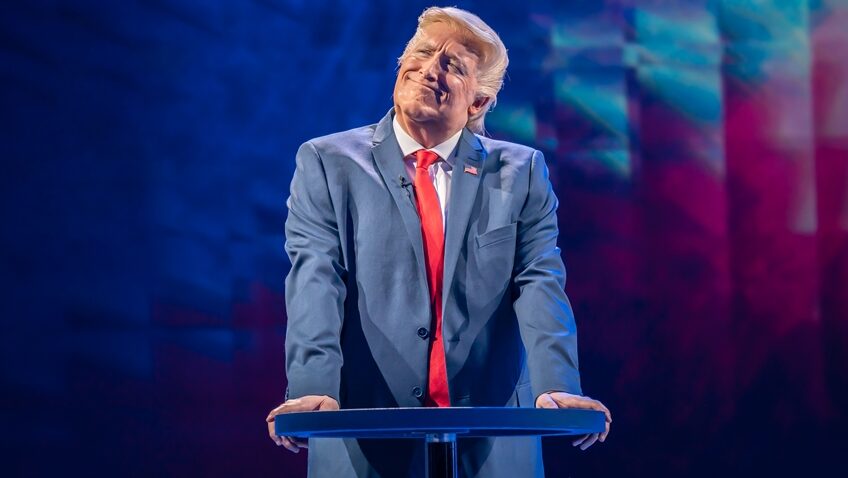 “I could,” boasted, Donald Trump, “stand in the middle of Fifth Avenue and shoot somebody and I wouldn’t lose any voters.” The prospect of Donald Trump returning to the White House again in 2024 as the 47th President is comic but not funny.

Mike Bartlett writes his satire in Shakespearian blank verse as he did when he wrote King Charles III. The new play does not have the same depth and audiences, who enjoyed King Charles III and looked forward to seeing The 47th, are likely to be disappointed.

Trump arrives in a golf cart to address the audience directly. There are references not only to Richard III but also to Julius Caesar, King Lear and Macbeth. Most effective is his confrontation with his children, Ivanka, Donald and Eric, asking them who loves him most.

Joe Biden has a meaningless sleepwalking scene, gratis. A New York journalist is blinded. The second act gets off to a lively start with a mob riot led by QAnon’s Shaman, the guy with the bullhorn headdress, who featured prominently in the assault on the Capitol on January 6th.

Rupert Goold directs. Miriam Buether designs the set. The Old Vic stage has been raised and thrust into the auditorium. The acoustics are not so good now. Some actors are more audible than others.

There will, no doubt, be other and better plays, films, television series, operas and musicals about Trump. There might be even be a ballet. Think of Charlie Chaplin playing with his balloon globe in The Great Dictator and what Matthew Bourne might do in a one-act ballet.