Home / LIFESTYLE / REVIEWS > / FILM REVIEWS / This extended Blondie music video is neither a celebration of women or older women. 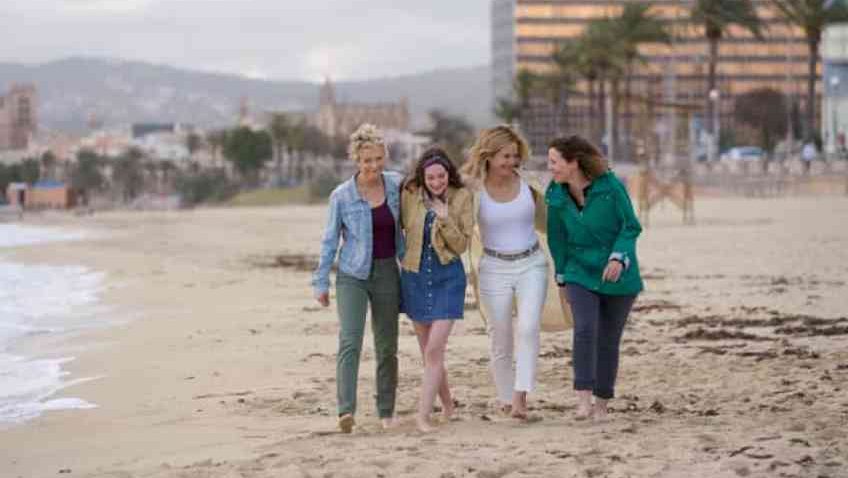 This extended Blondie music video is neither a celebration of women or older women.

Appealing to the greying pound might prove more of a challenge than the grey pound if Off the Rails is anything to go by. In this bitter-sweet comedy – or extended Blondie music video – three women in those invisible fifties and sixties years go on a rail journey to Palma de Mallorca. They are honouring the wishes of their deceased mutual friend, Anna, who makes the journey conditional on their taking along Anna’s teenage daughter, Maddie (Elizabeth Dormer-Phillips). That no one is particularly enthusiastic about this gift even without the condition is another matter. But how can the women, already feeling guilty for having drifted apart from Anna, refuse?

The film’s producer Bill Kenwright, a well-known West End producer, was no doubt instrumental in getting Judi Dench to appear in a cameo as Anna’s mother. Dench, who is there for the marquee value, does not have to act, but while on set, she is given the task of bestowing upon Anna’s three mourning friends, Liz (Sally Phillips), Kate (Jenny Seagrove) and Cassie (the late Kelly Preston in her last screen role) interrail passes to Palma.

The destination has sentimental value as Anna, who used to globe-trot on boozy holidays with her old friends, planned to take Maddie to the Espectáculo del Ocho, (the spectacle of the eight). That phenomenon on the Balearic Island occurs on only two days of the year when the light filtering through the stained glass in the Cathedral’s Rose window (the largest in the world) is reflected on the opposite wall and travels across the Cathedral until it forms an 8 in a magical light show.

Never mind that Kate, who is paying for an expensive care home for her elderly father and is seen taking her last £10 from her bank, has no money for the trip. Liz, who at this point does not realise that her husband is cheating on her (again), and Cassie, who plays a nurse in a television series like Casualty, have money, although it’s not clear how Cassie can suddenly get time off from a soap opera schedule.

The phenomenon in Palma occurs on 11/11 and 2/2, so the women, (who are not packed for the change in temperatures) are up against the clock. But seldom have four women seemed less determined to get anywhere, and seldom have the obstacles in their way seemed more fabricated to delay their arrival.

Jules Williamson’s directorial debut is matched by an uninspired script written, rather surprisingly, by actor/writer Jordan Waller. Waller is a young man whose previous credit Two Heads Creek, was no masterpiece, but was at least fun and infused with a bit of social commentary, so lacking in Off the Rails. What is worse, given that the women miss their trains, get distracted by anything, con a French saleswoman, lose their passports, a job and steal and lose a husband (Liz’s), there is a whiff of chauvinism in a film that is supposed to be a celebration of feminism.

As the adventures (single Kate meets Ben Miller, a middle-aged, itinerant ex-pat guitarist – what a catch) mount, so do the clichés. Cassie is called upon to help deliver a pregnant women’s baby when their train breaks down in the middle of nowhere (as they do).

The grateful parents invite the women back to their village for a celebration that night (no rest for the weary mother) promising to deliver them to the train to Palma the next morning. Who is there in this remote village to greet the guests, but the Italian stallion Franco Nero?

As in the 2017 grey pound movie The Time of Their Lives, Nero’s character, Giovani, is rich, lives in a big house, is conveniently single and such a great lover that Cassie only remembers she has a train to catch while sipping her morning coffee in Giovanni’s shirt. Nevermind that Kelly Preston was 57 and Nero is pushing 80, Giovanni invites her to stay, not the least bit bothered that her friends are waiting at the station.

Another gratuitous problem occurs when Cassie is sacked without due process after an Instagram of her and the girls getting sloshed reaches the sponsors and the network. They decide that she breached her contract for conduct not becoming to her character’s image. You have to wonder why, since the filmmakers bothered to invent the baby delivery scene, the video of Cassie the T.V. nurse delivering a baby for real did not go viral. The ratings would have soared.

But if you start wondering why anything happens in this movie, you are in the wrong cinema. You shouldn’t even try figuring out if the Blondie songs complement the action because they seem to be more or less randomly selected. Debbie Harry of Blondie, we are told, was Anna’s favourite singer, so that explains the soundtrack. Or does it?

At the funeral service Maddie plays a song and the three friends sing discretely along with her. But Maddie has a small, squeaky voice leaving us to wonder whether the film was originally conceived along the lines of Mama Mia with a singing cast and Blondie instead of Abba.

Apparently, the actors did not know Preston was dying during principal production, nor does Preston’s performance give anything away. She looks pretty great, as does Seagrove, and you just wish that there was something in the film to challenge these actresses or at least make us care about them. The movie is dedicated to Kelly Preston, but this sad note at the end is not jarring as you’d be hard pressed to find anything to laugh at in the film.