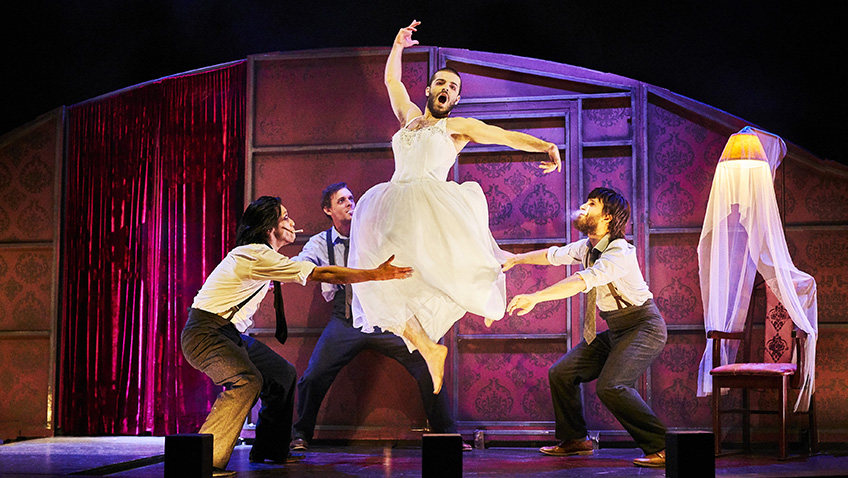 The audience gave Gecko’s The Wedding a standing ovation

The 2019 International Mime Festival is in full swing. One of the key events is Gecko’s The Wedding, which premiered in 2016, the year when Britain opted to leave Europe.

Gecko is an award-winning physical theatre company which was founded in 2001 by Artistic Director Amit Lahav. The work is visual and visceral and created through collaboration, experimentation and play.

The focus is on presenting a narrative through lively movement, arresting images and music rather than dialogue which is minimal and doesn’t really matter. The multi-national cast speak in their native languages. The music is drawn from folk and opera. 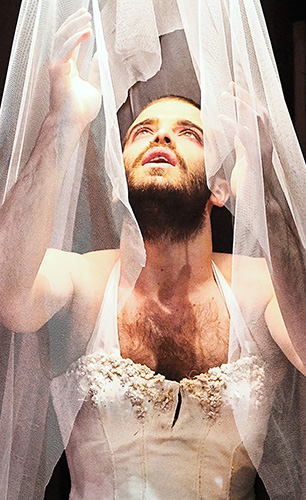 Fionn Gecko in The Wedding

Amit Lahav said The Wedding started as a battle between anger and love. The subject matter is about longing to belong to a community and exclusion. The refugee crisis figures prominently.

The show begins with the cries of women giving birth in the darkness. Actors, wearing only white underwear, arrive on stage down a chute and onto a pile of toys, clutching a teddy bear. They are immediately put into a wedding dress.

There is then a succession of births and weddings as celebrated by different cultures and including a Jewish wedding with canopy and breaking glass.

A series of images capture relationships with family and friends and colleagues at work and play. The workplace is a stock market trading floor.

The actors occasionally sit on chairs beneath a gauze-draped lampshade. One man sits at a table on a high plinth which can only be reached by climbing up the tablecloth. A huge curtain drops to reveal a man on stilts. He is quickly toppled.

The chaos is choreographed and organised but the narrative is over-long and lacks clarity.

One of the best moments is when the whole cast, male and female, clothed in bridal dresses, move in unison. The dress can be a symbol of either conformity or rebellion.

The biggest laugh is provided by the comic physicality of a refugee who lives with his family in a trolley zip-up suitcase.

The high spot is the tribal and rhythmic finale with the cast seated downstage in a row. They sing, clap and stamp, unaccompanied, a joyous sound.

The audience (which included a surprisingly large number of teenagers) gave The Wedding a standing ovation.