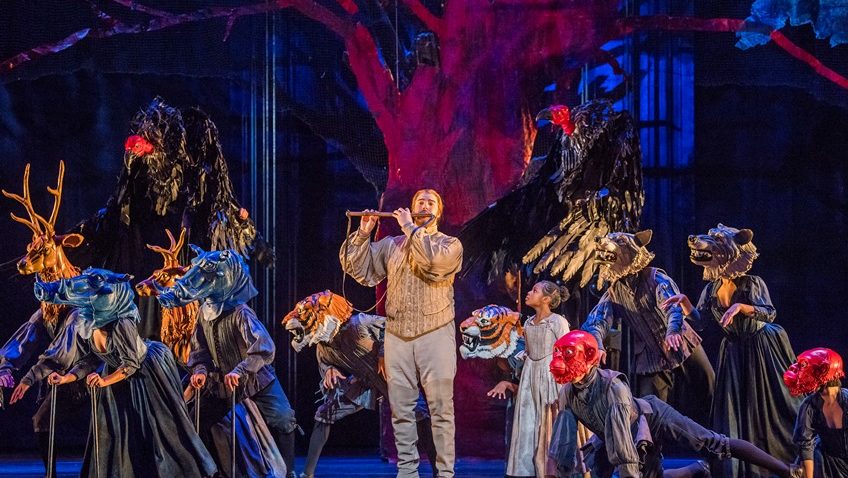 THE MAGIC FLUTE, Mozart’s most successful opera, premiered in Vienna in September 1791. Ten weeks later he was dead. He was just 35.

Harmony, truth, friendship, enlightenment and redemption: what more could any self-respecting Freemason want? Mozart and his librettist, Emanuel Schikaneder, were freemasons.

The fairy tale, secular and sacred, is a mixture of comedy, pantomime and Masonic ritual.

Audiences back in 1791 were quick to identify Tamino with Emperor Joseph II, Pamina with the Austrian people, the Queen of the Night with the Empress Theresa, Sarasto with Ignaz von Born (a freemason and scientist of great eminence) and Monostatos with the clergy, especially the Jesuits

David McVicar’s fine production premiered at the Royal Opera House in 2003. This admirable revival conducted by Julia Jones, dates from 2017.

Tamino (Mauro Peter) goes on a journey which is to test his steadfastness, patience and perseverance. Honourable, bold and obedient, he passes the test with flying colours and goes from darkness to light and enlightenment.

It is a journey which begins when he is saved from a serpent by three mature ladies who have a crush on him and want to fondle him. The ladies, Rebecca Evans, Angela Simkin and Susan Platts, give elegant and witty performances.

Tamino falls in love with a portrait of Pamina (Siobahn Stagg). The Queen of the Night (Sabine Devieilhe) asks him to rescue her daughter from a monster who has imprisoned her

But the surprise is Sarastro is not the monster the Queen led him (and us) to believe he is. The High Priest turns out to be noble, wise and virtuous and Mika Kares sings with nobility and authority.

Sabine Devieilhe, superbly costumed by John Mcfarlane, has two electrifying appearances, a blazing passionate display of cruelty and coloratura fireworks in Act I. In Act 2 she rages with passionate staccato coloratura and 4 top F’s.

Tamino is accompanied on his journey by Papageno, the merry but not very bright birdcatcher, who wants a wife and gets a floozie. Roderick Williams has a fine voice, lots of charm and a strong comic personality. (Papageno was the role librettist and singer Emanuel Schikander created for himself.)

The real monster is Monostatos. Creepy, kinky, and never more so than when he is trying to kiss Pamina. Peter Bronder looks like Max Schrek, the vampire in Nosferatu as he might have been played by Lindsay Kemp. His entourage are a comic group of doddery senile 18th century aristocrats in high wigs.

The opera has two messages. The first says Love is the reason for living and if you live in true harmony and forgive your enemies, the sun will chase away the dark night.

The opera ends with Pamina leading Tamino through fire and water to a grand finale. A huge sun comes out and a hymn is sung to celebrate the triumph of courage and human wisdom.

Imagine the uproar if Mozart and Schikaneder said that today.