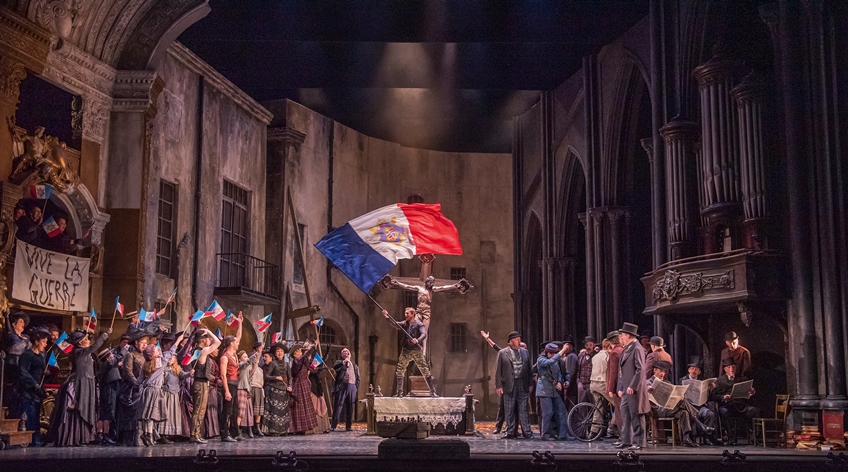 A doddery old man makes a bargain with Mephistopheles. He will give him his soul if he will give him back youth and the passionate pleasures that go with it.

Richard Wagner did not like Charles-Francois Gounod’s Faust which he described as a “vulgar patchwork with all the grace of a lorette united to the music of a second-rate talent.”

Be that as it may, Gounod’s Faust, bourgeois music for the bourgeoisie, was for a time the most popular opera in the world.

The libretto by Jules Barbier and Michael Carré, based on Carré’s play, concentrates on Faust’s love for Marguerite. The opera had so little to do with Goethe’s Faust and so much to do with Marguerite that in Germany they call the opera Marguerite.

This revival of David McVicar’s 2006 production, conducted by Dan Ettinger, was seen at the Royal Opera House last year.

The story has been updated from 16th century Germany to 19th century Paris and the Second Empire and on the eve of the Franco-Prussian war. Michael Fabiano’s Faust, with his top hat, tails and cane, looks a very smug boulevardier

Erwin Schrott’s Mephistopheles, thank goodness, does not look like the stagy Devil he used to look in the 19th Century: flamboyantly, absurdly theatrical, in his flaming red doublet and hose with two ostrich feathers in his cap. Schrott looks like a Belle Epoque libertine, sardonic, not comic.

The French Revolution had guillotined God along with the aristocrats; but by the time Gounod was writing his opera, the Roman Catholic Church had made a comeback and death and salvation were once again on the agenda. Nobody cared if Faust went to hell and eternal damnation, but nearly everybody wanted Marguerite to go to heaven.

Faust sings how chaste and pure Marguerite is, a celestial and innocent soul. Marguerite is a much more likeable person than Faust is. She has her Jewel Song, a gift for a colatura soprano. Her vanity and a chest full of ear-rings, bracelets, necklaces and a mirror make her more endearing, even comic.

Irina Lungu and Michael Fabiano have some ravishing passionate duets together.

It comes as a shock to learn that Marguerite has killed her baby, fathered by Faust. The most dramatic scene is when she goes to a candlelit church with a huge statue and finds the aisles crawling with bare-chested demons. The statue suddenly comes alive and Mephistopheles steps down from the plinth to tell her that hell awaits her.

Mephistopheles is a man of the theatre with conjuring tricks. He sings a blasphemous song to a drunken crowd and encourages them to pull down a statue of Christ on the Cross. He takes Faust to a tacky cabaret at the Cabaret d’Enfer in Montmartre and he has a quickie with an old whore (Carole Wilson).

Schrott and Wilson join Luncu and Fabiano for an enjoyable quartet.

Valentin (Stephane Degout), Maguerite’s brother, (not in Goethe, an invention by Carré) is killed by Faust when Mephistopheles intervenes. Valentin is the character you care for most and his untimely death has a far bigger impact than Faust’s death. Stephane Degout is excellent.

A ballet was added in 1869, ten years after its premiere, against Gounod’s wishes; but with the insistence of the Palais Garnier. Choreographer Michael Keegan-Dolan, let loose, delivers an extremely vulgar version of Les Sylphides with loads of pregnant ballerinas. Mephistopheles participates in full drag

The rich patrons who subsidized the Palais Garnier, Paris’s opera house, came to the opera to ogle the dancing girls and pick them up after the show. Forget Degas. It wasn’t pretty. The Garnier was the most famous brothel in Paris, its grandeur and squalor reflecting Parisian society in that era. Sexual exploitation was the norm for ballerinas. During 1830s and 1840s just over a third of children born in Paris were illegitimate.

The last words of Gounod’s Faust are: “Christ is risen again.” Ironic, indeed.

NB On Friday 24 July Royal Opera House will be streaming Royal Ballet’s Sleeping Beauty for free for a week.