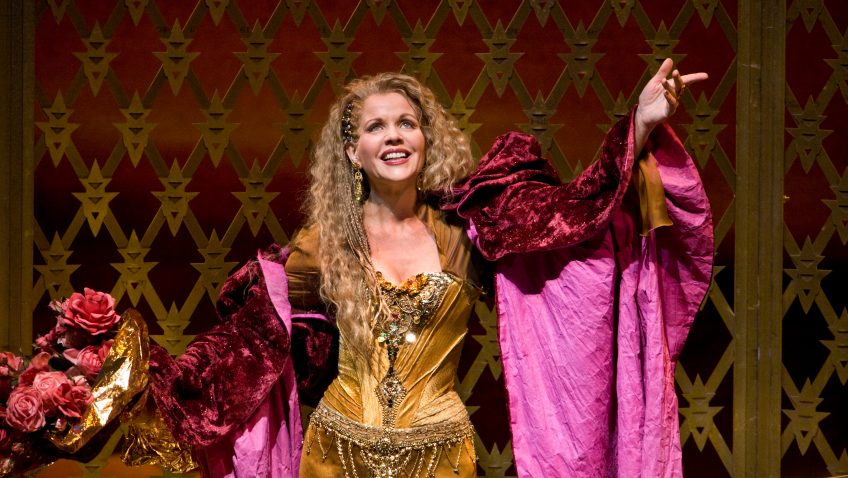 Jules Massenet’s Thais premiered in Paris in 1894 and was revised in 1898.

The opera is based on Anatole France’s best-selling novel which was published in 1890. Religious eroticism is always good for sales.

Massenet’s score is lush and sensual, lyrical and passionate.

The opera is notoriously difficult to sing and is not often performed because there are few sopranos who can sing it.

The present performance, directed by John Cox and conducted by Jesus Lopez-Cobos for The Metropolitan, New York in 2008 is sung with powerful intensity by Renée Fleming and Thomas Hampson.

Which would you prefer? Salvation in heaven or sex on earth? Self-denial or lust? An ascetic monk and a voluptuous courtesan have to make up their minds.

The story is set in 4th century CE. Athanael, the monk, living in the desert, wants to convert Thais, the Egyptian whore, who lives in decadent Alexandria, to Christianity. He knew her before he became a monk. His Cenobite brethren advise him not to interfere. All he needs is a bit of self-flagellation.

He goes to Alexandria to find her and is reunited with his best friend, Nicias, who is having a very expensive week of sex with Thais, and advises him he is wasting his time. He is mocked for his prudery.

Renée Fleming as Thais has a wonderful diva entrance with bouquet. She is beautiful. She is elegant. She’s seductive. She’s a great singer. She warns him of the dangers of suppressing sexual feelings.

Fleming and Hampson have some impassioned singing in her bedroom. She is finally persuaded about the joys in heaven. Athanael insists she destroy her home first and then drags her off forcibly to the convent.

It’s a great climax musically; but it’s not the sort of climax he wants. So, it’s back to flagellation.

Fleming and Hampson are in great form. David Chan also gets an ovation for his violin playing in the entr’acte Meditation.

NB The Metropolitan New York is streaming a different opera for free every night.