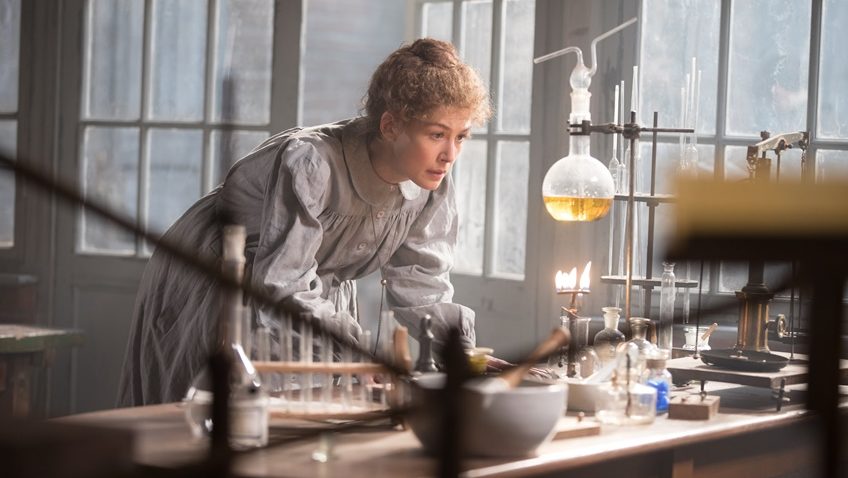 This Marie Curie biopic is distinguished by a thought provoking feminist and futuristic angle.

There have been previous big screen adaptations of the life of Marie Curie from 1943’s Madame Curie (starring Greer Garson) to 1977’s Les Palmes de M Schutz starring Isabelle Huppert. Most depictions are straightforward, although in the 1997 television movie, Marie Curie: More than Meets the Eye, Curie’s curious experiments and actions make her a suspect to a group of WWI spy catchers. Rosamund Pike (A Private War, A United Kingdom) is no stranger to biopics, to the extent that this obvious casting, coupled with the familiar subject matter, makes it difficult to get excited about Radioactive. But director Marjane Satrapi, an Iranian-born, French graphic artist, has based her film on Lauren Redniss’s graphic novel, Radioactive: Marie & Pierre Curie, a Tale of Love and Fallout and the result is, if not electrifying, illuminating and thought-provoking.

It is Paris, 1934 and Marie Curie, 66, collapses in her laboratory. From here, the action is a long flashback with Curie, dying in her hospital bed, recalling her life. But it is the controversial flashforwards, designed in a fabulously colourful graphic novel style to contrast with the drab turn-of-the century and WWI scenes that are the making of the film.

Marie’s mother’s premature death may have taught Marie to fend for herself with a fierce independence, but this also comes from being a woman of science in a man’s world. The script is full of examples of the brazen sexism she has to deal with on a daily basis. These socio-economic obstacles only make Marie Curie’s accomplishments all the more laudable.

There is a wonderful silver lining tale in the story of Marie’s rejection by the establishment, and, if Satrapi’s direction is sometimes clunky, the romance of it shines through. We are now in 1893 at the Sorbonne’s Faculté des Sciences. A stern, conservative looking Professor Gabriel Lippmann (Simon Russel Beale) evicts Marie from the premises, accusing her of having too much equipment. Cue the first of several regrettable expository dialogues as Marie tells the male committee, and the audience, how she came all the way from Poland to study science, etc.

Marie is too proud to beg, so cue a shot of her freezing in a Parisian garret with a view of the Eiffel Tower. This backdrop might be clichéd, but the tower was built for the recent World’s Fair showcasing modernism and progress and becomes symbolic of Curie’s future role in the march of progress. That Curie would become arguably as famous as the Eiffel Tower might just justify the shot.

Dealing with rejection after rejection, Marie is not in the mood for small talk when she is approached by Pierre Curie (Sam Riley) with a great pick up line: ‘I read your paper on the magnetic property of steel…’ Sparks do not fly immediately, although Pierre is, like Marie, an outsider and maverick, having been passed over for positions and professorships – despite being a male, and French.

Marie is guarded when Pierre offers her laboratory space. She likes to work alone while he likes to invite cooperation in his lab. She makes it clear that she will not share her work with him and will not be his mistress. ‘The thought hadn’t occurred to me’. Pierre replies, although they are soon working in partnership as a married couple.

Satrapi does an admirable job explaining Curie’s ground-breaking research and showing us the physical demands on Marie, pregnant and chopping four tonnes of black pitchblende in the hope of finding a pin prick of radium. She takes us from discovery (they isolate and first see a pin prick of radium) – to discovery (Marie identifies polonium, a rare and highly radioactive metal with no stable isotopes that she names after her native country) to discovery (the two elements emit rays that she calls radioactivity), determined to make us understand Curie’s accomplishments.

While Jack Thorne’s often heavy-handed script plods along to cover the key points in Curie’s life, the onset of illness (Pierre is the first to start coughing blood) is imaginatively intertwined with the development of their discoveries. We jump to 1957 and early attempts to save a young boy’s life with radiation therapy, and as the Curies’ work is nominated for a Nobel Prize the screen fills with the bombing of Hiroshima in 1945. Without explanation we are forced to consider the irony of an international prize that leads to such destruction, and eventually, to the Cold War.

The theme of gender inequality emerges again when Marie expresses her resentment that Pierre has “stolen her brilliance,” in Stockholm, accepting the prize alone, in his name. Despite controversy over an affair with Pierre’s married colleague, Paul Langevin (Aneurin Barnard) that almost ruins her career (which would hardly dent a man’s career), Marie becomes the only person in history to win the Nobel Prize twice, in 1911, for chemistry. This time she goes to Stockholm alone.

The brown, muted tones and period sets of the main story as Marie starts coughing in her lecture hall, are in sharp contrast with the literally explosive graphic, novelesque scenes of Hiroshima in 1945, the Nevada test site in 1961 and Chernobyl in 1986. At the Nevada test site, where a 1950’s model bungalow is subjected to experiments with the hydrogen bomb, we watch a family of manikins melt away to nothing in the unimaginable heat. These CGI scenes are so striking that they bestow on the main action a haunting historical context that no other Curie biopic has ever managed.

To their credit, the film introduces Irène (Anya Taylor-Joy), who seldom shares the spotlight with her mother, although she, and her scientist husband, Frédéric Joliot-Curie, follow in the footsteps of Irène’s parents, and the couple wins the Nobel Prize in 1935 for their discovery of artificial radium. This subplot is so intriguing – particularly when you consider that Irène, who died at 58 of cancer, was another victim of the Curies’ discoveries, that it becomes distracting: it merits a separate film.

In WWI, Irene encourages her mother to overcome her aversion to hospitals and use radiation to help prevent the unnecessary amputation of limbs with the invention and installation of x-ray machines. Here Satrapi misses a great opportunity to dramatise Marie’s major contribution to the war effort, and a non-destructive outcome of the discovery of radiation. Instead, we are left with a familiar scene of Curie taking on nursing duties as mutilated soldiers are carried into a field hospital.