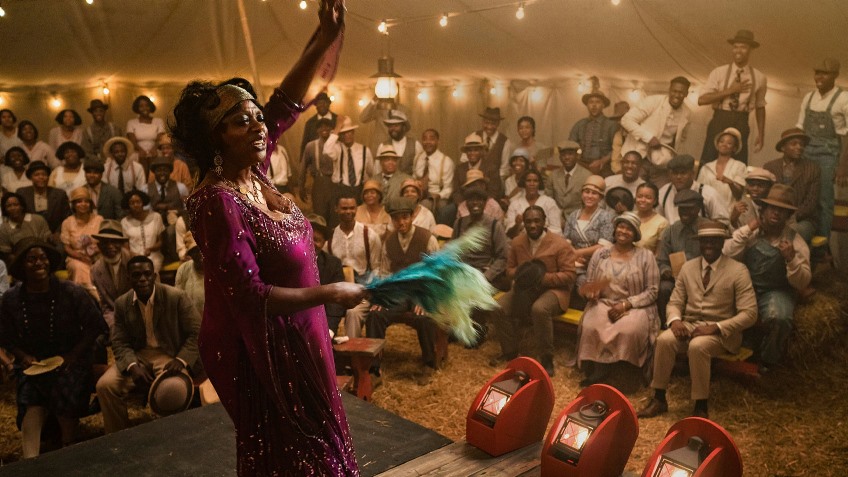 RADIOACTIVE (StudioCanal). Marjane Satrapi directs this interesting biopic of Marie and Pierre Curie. He won the Nobel Prize for their discovery of radioactivity. They had a passionate relationship both in the laboratory and in the bedroom. She, a feminist icon, is convinced that, scientifically, he needs her more than she does him. Their invention can cure cancer and cause it. They did not live to see Hiroshima and Chernobyl. Rosamund Pike and Sam Riley give engaging performances.

MA RAINEY’S BLACK BOTTOM (Netflix) based on August Wilson’s Black American experience play, set in the 1920s. Ma Rainey (Vola Davis) and her band have come to a Chicago studio to record Black Bottom. The white record company wants her to sing an up dated jazzy version, aimed at a white market. Ma Rainey wants to sing her old Blues version. And behaves like a prima donna. She arrives late, delays recording until she has drunk a coke and insists her stuttering young nephew makes the introduction to the song. The late Chadwick Boseman makes a big impression as the brash, sexy horn player, in fancy white shoes, who has ambitions to form his own band, and reacts badly when he is rejected.

PERFUMES (Curzon). Gregory Magne’s enjoyable French film has considerable charm and the actors are perfect. Emmanuelle Devos is a perfumer who lost her gift for smell and now works for industrial businesses rather than the perfume industry. She is an unsympathetic and selfish character. Gregory Mantel is her chauffeur whom she treats as her dogsbody.

ABOUT ENDLESSNESS (Curzon). A series of images, tableaux by Swedish director Roy Anderson who directed A Pigeon Sat on a Branch Reflecting on Existence. A single frame is held for a long time to enable the viewers time to study the image in the same way as they might explore a painting by Edward Hopper. All human life is there, mundane and lonely. A priest has lost his faith. A defeated army marches into the distance. A car breaks down miles away from any help. You can make up your own back stories. Strictly for Anderson aficionados.

MOFFIE (Curzon). A brutal South African film about national service in the 1980s during the Apartheid era and the Border War. The 18-year-old conscripts have a vile time during basic training, indoctrinated, intimidated, bullied, humiliated by a sadistic homophobic sergeant. Moffie is slang for faggot. Oliver Hermannus directs. Warning: the film is not pleasant to watch.

BLITHE SPIRIT (StudioCanal). I thought I was going to see Noel Coward’s play but the script has been completely rewritten, leaving only the basic premise of man who finds he has two wives, one real (Isla Fisher), the other a ghost (Leslie Mann). The character of the husband (Dan Stevens) has been rethought completely. Judi Dench’s Madame Arcati, the fortune-teller, is no longer a comic character but a tragic woman who lost her fiancé in World War 1. The film, poor on its own terms, is a travesty of a classic comedy and it’s going to annoy a lot of people. Coward is no doubt rolling in his grave.