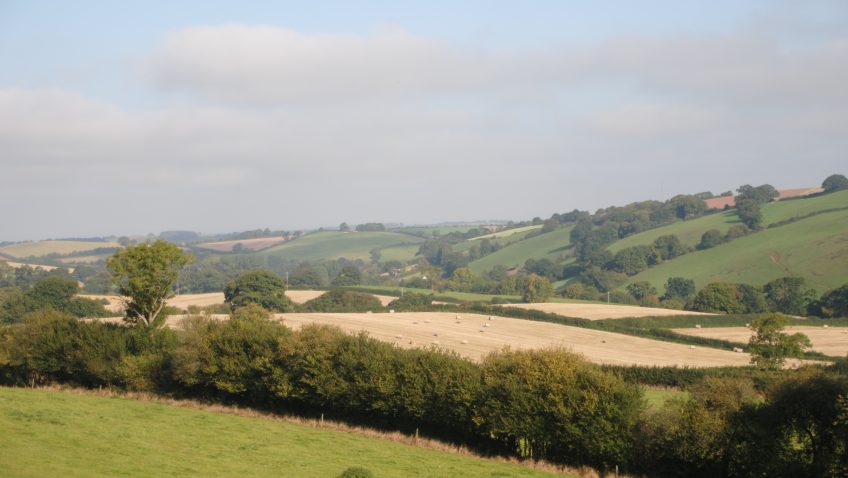 Adventures On The Coleridge Way

“I wonder what adventures we shall have today,” I said to my walking companion Peter Gibbs as we set out from a picturesque Somerset village on a stormy Autumn morning.

It was the ritual question I always asked at the start of our latest long- distance trek.

This time we were following in the footsteps of one of England’s most famous poets, Samuel Taylor Coleridge from his cottage in Nether Stowey all the way to Lynmouth in North Devon.

Had I known the answer to my question I am not sure I would have quite believed it.

For during the course of that first day on the 51- mile- long Coleridge Way, we met a dinosaur, stared up at white clouds of cotton wool, were entertained by a retired prison governor and came across a world- famous church gargoyle.

The huge wrought iron dinosaur put in an early appearance as he was guarding a villager’s garden just before we began our long climb up the wooded slopes of the Quantock Hills.

The heavens opened after we gained the ridge only to discover that the way now led back down wooded Holford Combe almost to sea level before climbing back up again past Alfoxton House, once rented for a season by Wordsworth and his sister Dorothy.

Then as we regained our height, we were rewarded by magnificent views across the Bristol Channel to Wales.

By lunchtime we’d crossed back over the Quantock ridge to descend to the pretty village of Bicnoller and then on to the quaintly named village of Monksilver where we were overnighting and it was here that the rest of the day’s memorable adventures began.

We’d made good time and were hoping for a late afternoon pint in the Notley Arms but being a Monday, the hostelry was closed.

“Never mind Pete, as it’s a bit too early to go to the B&B let’s just sit outside the pub and have a breather?” I said which turned out to be a most fortunate suggestion.

For five minutes later, landlord and retired prison governor Simon Murphy appeared and to our surprise, invited us in.

We’d not been settled with our pints long before Peter looked up to see a cluster of white clouds suspended from the ceiling, so what on earth was all that about we wondered?

The ingenious explanation, Simon told us, was that because the bar and restaurant areas had stone floors, this produced a lot of additional noise when there were a lot of customers in.

So the clouds, made of cotton wool, were designed to absorb the sound and were a bit like the much larger mushroom shaped ones used in the roof of a packed Albert Hall.

Simon then gave us a mini local history lesson, including the fascinating fact that adorning the nearby parish church was a gargoyle believed to be the first of its kind in the world because it depicted a dentist with his patient.

So we had to go and check this out and sure enough there they were together with a pot of ale to anaesthetise the patient.

The following morning, we trudged uphill on a footpath through oak woodland for a mile and a quarter en route for our next stop in the hamlet of Luxborough.

Shortly afterwards, we were chatting as we walked along a narrow lane when we heard a vehicle behind us and turned to meet Forestry England Wildlife Ranger Brian Turley, who has ranged across Exmoor and the neighbouring Quantock and Blackdown Hills for the past 30 years.

These days Brian, who lives near Wheddon Cross, on Exmoor, spends much of his time protecting wild life habitats while liaising with contractors coming in to harvest the timber.

“They might need to be aware of particularly sensitive areas where we may have anything from Dormice, protected birds and bats and other wildlife habitats to protect,” he said.

With four miles to walk we stopped for lunch at The Valiant Soldier in Roadwater where Michael Twine, the landlord for over thirty years, said his business had definitely benefited from having the Coleridge Way running past his front door.

He told how during the last war the local Home Guard came up with the cunning plan of disguising a pill box as a house which we had to go and check out.

We stayed overnight in Luxborough’s comfortable Royal Oak before setting out on the next thirteen-mile hike to the picturesque town of Porlock on the shores of the Bristol Channel.

Enroute, we crossed open moorland close to the mighty Dunkery Beacon, the highest point on Exmoor, and then on to Webber’s Post above the wooded coombs of pretty Horner Water.

Now we descended through woodland to the hamlet of Horner where I was delighted to see that the tea garden, which I first visited over thirty years ago, is still going strong.

Refreshed by tea and cake, it was then only a short woodland stroll into Porlock for our overnight stop.

The final day of the walk from Porlock to Lynmouth is all about a very steep hill, a famous romantic story and what has to be one of the prettiest waterside woodland walks in Britain plus a finale surprise!

The hill is Porlock Hill, so long and steep that even the guide book advises Coleridge Way walkers to have a day’s rest before tackling it.

The path winds its way up through woodland to pass, tiny Culbone Church, the smallest in England, via a small detour, and then eventually over the busy A39 Lynmouth road to drop down to the little Church at Oare close to the famous Doone Valley.

It was here in RD Blackmoor’s famous novel Lorna Doone that the heroine was shot but recovers.

Later the way arrives at the tiny hamlet of Brendon to meet the fast- flowing East Lynn River which it follows all the way down to Lynmouth via tiny Rockford and the famous Watersmeet beauty spot.

But close to journey’s end, we came across a fallen trunk pitted with hundreds of coins.

Apparently, these “Money Trees” have randomly popped up all over the country in recent years and supposedly bring donors prosperity and good luck

I found a place for a shiny ten pence piece but as I walked away, it occurred to me that we’d already been lucky enough to enjoy four days walking through wonderful scenery cloaked in autumn’s gold.

We used The Coleridge Way Companion Guide together with the essential OS Landranger map 181 Minehead and Brendon Hills.

Our accommodation, right on the route, was at The Ancient Mariner in Nether Stowey, Bridleside b&b in Monksilver, the Royal Oak in Luxborough and The Castle Hotel in Porlock.