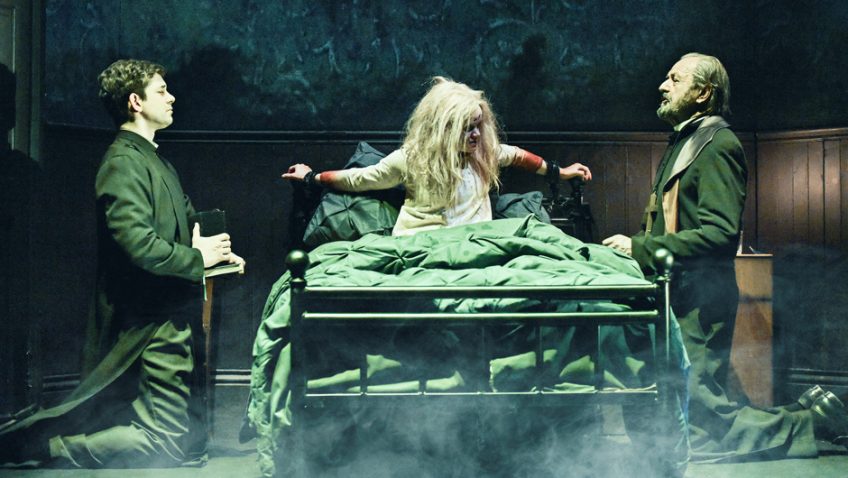 The Exorcist is diabolical!

The Exorcist, the 1973 blockbuster, luridly sensational, full of cheap shocks and crude novelty, played on the audience’s fears and produced hysteria worldwide. The St John Ambulance Brigade was on permanent stand-by. Jenny Seagrove and Clare Louise Connolly in The Exorcist

The press described the film as “prurient, morbid rubbish… thoroughly evil… an insult to the intelligence and a disgrace to the cinema.”

The Exorcist, a study of paranoia and schizophrenia, is a supernatural horror story about a 12-year-old girl who is diabolically possessed and causes three deaths.

The story was based on an actual case which happened in 1942 and the disorder might well have been hysterical rather than supernatural and in need of a doctor rather than an exorcist.

The girl masturbated with a crucifix. Her language was blasphemous and obscene. She vomited bile. She had the punch of a heavy-weight boxer and the kick of a horse.

The exorcism lasted 20 minutes and was painful to watch. Linda Blair’s face and body looked like a ravaged doll. Everybody still remembers the rotating head.

Many critics thought the film should be banned, fearing it the effect it might have on a psychologically sick child. Its video release was delayed by 23 years.

The Exorcist, nevertheless, was supported by the Jesuits and three of its members acted as technical advisers and took small roles.

Some people thought the film was Catholic propaganda to scare lapsed Catholics back into the church. Certainly, churches noted an increase in attendance.

The stage version is an adaptation by John Pielmeier of William Peter Blatty’s novel and is not an adaptation of the William Friedkin film.

The roles played by Ellen Burstyn, Max Von Sydow and Linda Blair are now played by Jenny Seagrove, Peter Bowles and Clare Louise Connolly. The director is Sean Mathias and the management hopes to reach out to audiences that might not otherwise go to the theatre.