Home / LIFESTYLE / REVIEWS > / Robert Tanitch reviews THAT IS NOT WHO I AM at Royal Court Theatre, London. 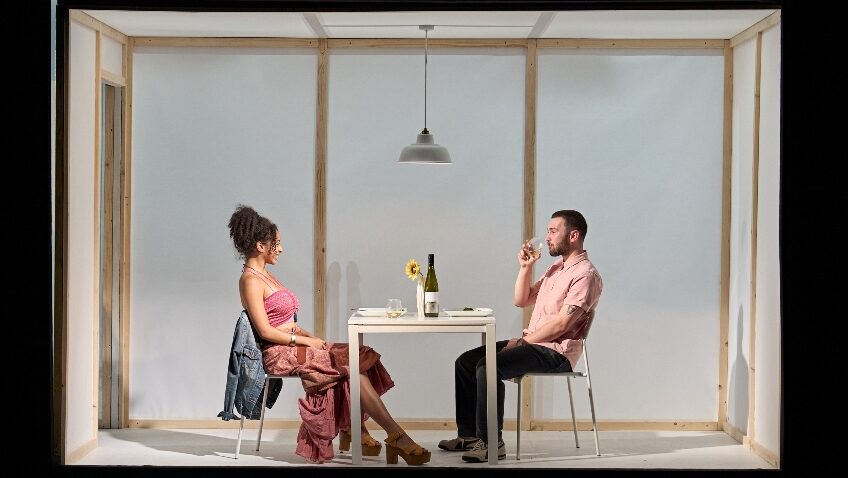 Robert Tanitch reviews THAT IS NOT WHO I AM at Royal Court Theatre, London.

The Royal Court Theatre announces it is going to stage a play by Dave Davidson who has worked in the security industry for 38 years. That Is Not Who I Am is Davidson’s first play and it is described as “a slippery thriller in which nothing is as it seems and nobody is who they are.”

Once inside the theatre, just as the production is about to begin, a statement is projected on a screen: an apology from the Royal Court, that we are not going to see That Is Not Who I Am and we are going to see a play by Lucy Kirkwood called Rapture instead.

Kirkwood has been commissioned to write a play dramatising the lives of Noah and Celeste Quilter who were murdered. The Home Secretary had blocked publication of the report into their deaths. The Royal Court’s covert production is in fact breaking the law.

Noah, an ex-soldier, and Celeste, an NHS nurse, meet on a blind date. They have an affair, they get married, try to conceive a child and fail to do so for a long time. Wanting to change the world, they become political activists. Noah expresses his radical views on his YouTube channel. The couple find themselves under constant surveillance.

Kirkwood herself appears on stage and acts as narrator. She remains on stage all the time. Kirkwood is played by Pryanga Buford. Jake Davies and Siena Kelley are cast as Noah and Celeste. Lucy Morrison directs.

Rapture is a satire on state censorship and the paranoia, fake news, conspiracy theories, social media and digital data create. Can you tell the difference between reality and fiction? Did you know 6 million CCTV cameras are active?

The longer the production went on, and it certainly went on too long, the more tiresome I found the play’s whole format.