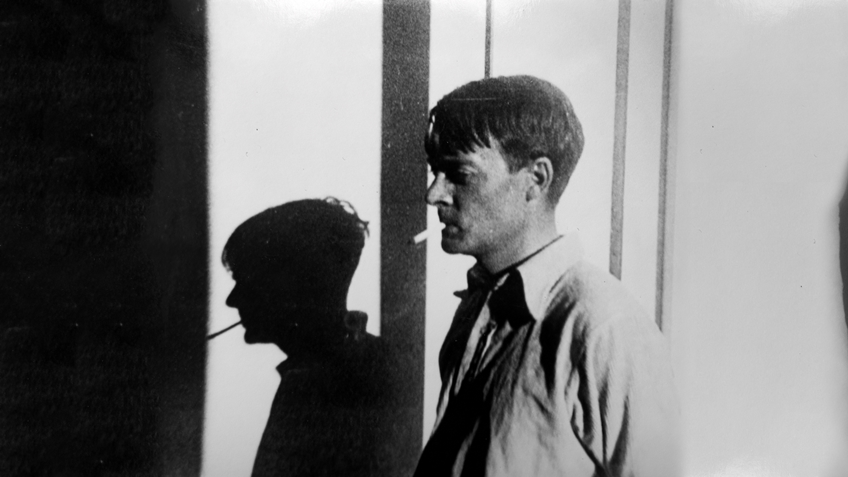 An enlightening and richly illustrated biopic of the undervalued British artist.

Writer-producer-director Margy Kinmonth’s generously illustrated documentary is the first feature film about the London born artist Eric Ravilious (1903-1942) who immortalised the land and seascapes of Sussex and Essex in charming watercolours and engravings, earning him the sobriquet of a quintessentially English artist. Yet the film’s instructive commentators question the simplicity of this view and point to signs of interwar angst.

As the title suggests, however, as well as the interwar art, the film focuses on Ravilious the WWI war artist. Fittingly for a title with “war” in it and a pun on “drawn”, the film begins with schoolboy Eric sketching World War I war planes and ends with 39-year old Eric drawing World War II planes, like the one he was in for a search and rescue mission when it crashed over Iceland in 1942, killing all on board.

This is a cradle to grave biopic, but, unusually and effectively, one that can, in part, be recounted in Ravilious’s words, voiced by Freddie Fox. Fox animates Ravilious’s enthusiastic letters about his art projects written primarily to his wife and two mistresses, some of which were inherited by his only living child, Anne Ullman.

Kinmonth does not gloss over Ravilious’s wife, the artist Tirzah Garwood or, “Tush” as Ravilious called her, describing their meeting at Eastbourne School of Art in 1926 and including home movies of their wedding. Tamsin Greig conveys with nuanced emotion Tirzah’s tough 12-year marriage through her letters and her autobiography intended for their three children, Long Live Great Bardfield and Love to You All.

By all accounts, Ravilious was good looking, cheerful, intelligent, witty and light-hearted, traits that made him desirable company and that he transferred to his art.

Although Ravilious renounced his extramarital affairs when his son John was born, even before his war assignments, he was always on location painting, leaving Tirzah to raise the family and tend to the household at the expense of her own career.

But there were happy times, including early days in their beloved rural retreat overlooking the South Downs called Furlongs. A high point was their collaboration on the ravishing murals for Oliver Hill’s new Midland Hotel in Morecambe Bay, although they knew that, for technical reasons (not of their doing), the murals would not last.

Ravilious’s father eked out a living selling light bulbs after he lost his antiques business in WWI, and throughout his life Ravilious was short of money. Nonetheless, through hard work in 1924 he earned a scholarship to the Royal College of Art (RCA) where his influential teacher was the official (WWI) war artist Paul Nash. As curator/author Alan Powers points out, a factor that was to draw Ravilious to war was not only the opportunity to travel and paint new and unusual settings, but the steady pay cheque for painting all day. It was a combination he could not resist.

At the RCA, Ravilious befriended Edward Bawden, another future war artist, with whom he collaborated on an early commission for murals for the Morley College Tearoom (sadly destroyed in WWII). The two friends would share The Brick House in Great Bardfield, Essex from 1931-1934 with Tirzah and Bawden’s wife, Charlotte, forming the Great Bardfield Artists group.

To complement the voiceovers, daughter Anne (now 81), granddaughter Ella, and a handful of curators and well-known artists and writers appear on screen to provide insights into specific works of art. A criticism of the documentary is that in other cases, the paintings that appear on screen are not identified by captioned titles so that in most cases, we do not know the name of the painting that we are looking at, (and consequently, how to locate it in a museum or private collection).

Ullman, Alan Bennett, and Essex artist Grayson Perry join in a delightful discussion of Ravilious’s famous alphabet mug designed for Wedgewood, which are now valued collectors’ items. Curiously, Ravilious’s first designs for Wedgewood were considered “too above the heads of the public”, so what could be more basic than the English alphabet? But Ravilious’s imagination works magic on all objects. The illustrated letters form a self-portrait as he chose objects that had a special meaning to him.

Grayson Perry marvels at Ravilious’s ability to turn ordinary subjects into paintings with such bold precision that the atmosphere in his Farmhouse Bedroom is so palpable that “you can smell the damp”. Robert Macfarlane comments on Ravilious’s gentle, almost abstract paths that lead the eye into the work so that you want to follow them. It is as if the artist dreams his way back into a “pre-national” landscape, leaving Macfarlane questioning not only Ravilious’s identity as “a quintessentially English painter” but the reassuring nature of his “traditional” figurative subjects.

Looking at Tea at Furlongs, Alan Bennett is struck by the eerie, silent atmosphere and absence of people – as though hurriedly departed – that belie the quaint title and the picturesque table overlooking the countryside. Commenting on Ravilious’s famous watercolours and engravings of the mysterious chalk figures on the Sussex hills, Curator John Russell notices how Ravilious fuses the ancient (the ancient chalk figure) with the modern barbed wire (which had just been invented).

The reason Ravilious is not more famous could be that his medium of choice, water colours – and drawings (many, made into prints) – was not as marketable or appreciated as oil painting. But when he was assigned to a submarine in WWII, the movement of the boat and cramped quarters turned speed into a virtue.

Ravilious was attached to the Admiralty with the honorary rank of Captain, Royal Marines from February 1940. The film details his assignments and travels, again primarily via his letters written to Tirzah who, during this time, was suffering from the cancer that would kill her in 1951. “This commission [in Iceland] has to be the most exciting of the war so far,” Ravilious wrote in his last letter to Tirzah, read in full at the opening and closing of this absorbing and enlightening film.

For the schedule of theatres showing the film and Q & As follow this link.