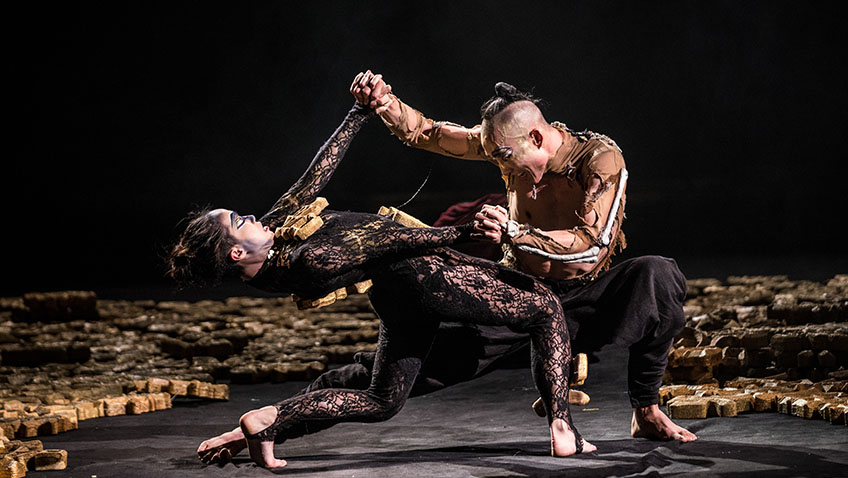 Proust, Picasso, Ravel, Debussy, Cocteau, Gertrude Stein, simply everybody was there for the legendary premiere of Igor Stravinsky’s The Rite of Spring in Paris on the 29th of May, 1913. The rioters made so much noise the dancers could not hear the orchestra.

Nijinsky’s original choreography is lost; but there have been over 200 dance versions since. Only a month ago I saw Pina Bausch’s version at Sadler’s Wells.

The latest version is a radical reinterpretation by the Chinese choreographer, Yang Liping, who is best known to Sadler’s Wells audiences for Under Siege. Its success internationally led to the formation of Peacock Contemporary Dance Company. 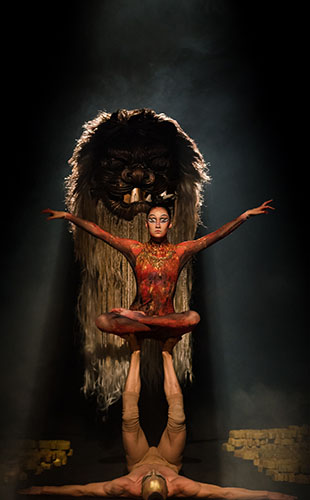 Dancing, says Yang Liping, is a kind of spirit. Her Rite of Spring is a Buddhist cycle of life and rebirth, choreographed in traditional and contemporary dance and offering audiences a mixture of Tibetan and Chinese culture, religion and symbolism.

Instead of a familiar pagan ritual sacrifice there are Asian spiritual philosophies, symbols and aesthetics. The journey from fear and doubt to empowerment is divided into three parts: Incantation, Sacrifice and Reincarnation.

Xuntian He’s Tibetan music bookends the production. Stravinsky’s music is reserved for the frenzy in the sacrifice sequence. The Chosen One volunteers for death willingly, welcoming it, knowing she will be reborn.

The images are colourful and beautiful. The visual director is Tim Yip. Fabiana Piccioli’s lighting is striking. A golden Tibetan bowl floats at the back of the stage. A symbolic white lion has an awesome roaring mouth mask. His shaggy body towers over everybody.

There are thirteen women with elaborate headdresses, distinctive eye-makeup and flickering green fingers. The piece begins in static prayer. The pace initially is slow and elegantly precise. One of the high spots is the women in single file, one behind the other, undulating, a constant rising and falling wave.

There are only two men and one of them, Da Zhu, first in lioncloth and then in loincloth, is a formidable representation of male power and sexual dominance.

The second man is a Tibetan monk, who remains on stage the whole time and is totally oblivious of what is going on around him. He concentrates on creating a mandala with bricks The bricks are in the shape of Chinese characters.

Yang Liping received a bunch of flowers in her curtain call and offered it to the monk, which he, to her surprise, brushed aside as if her gesture was too material and not spiritual enough for him to accept. I did at times wonder if he was a genuine Buddhist monk. He isn’t, he’s an actor, Xiaofan Feng. 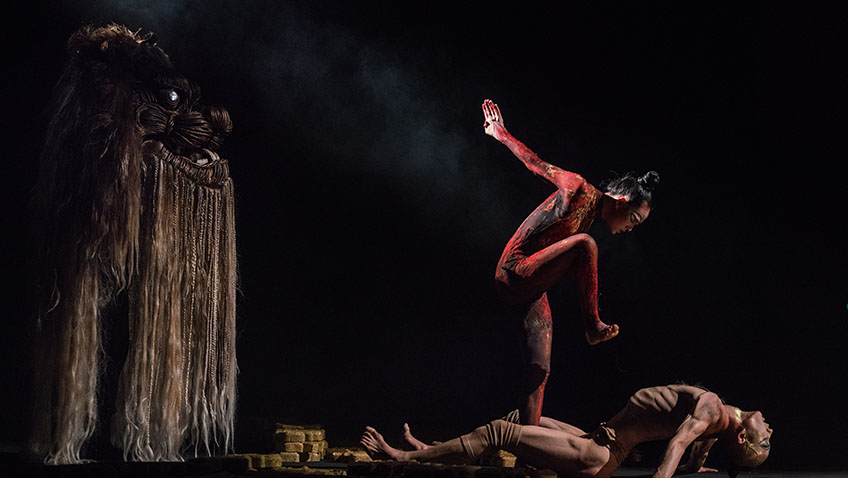