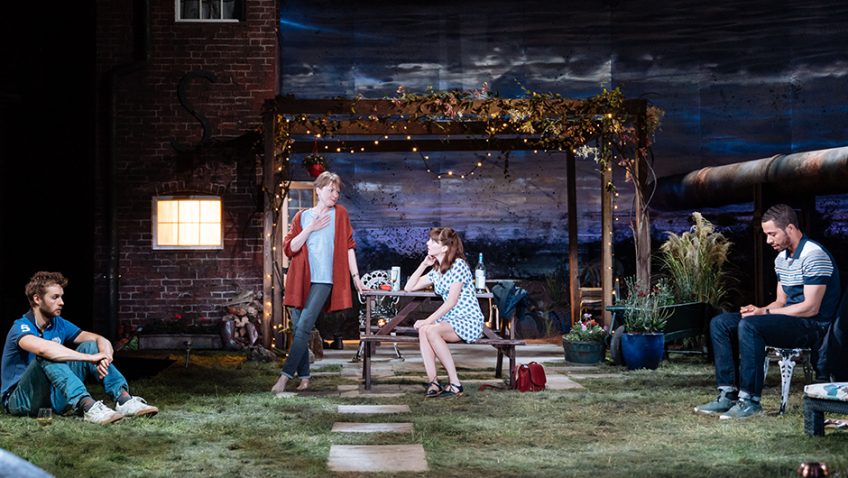 Barney Norris won the Critics Circle Award for Most Promising Playwright for Visitors, a play about dementia, which was seen in London and on tour in 2014.

The intimacy of the Bush Theatre suited Norris’s play well. The Bush seats 180. The Bridge Theatre seats 900 and is not so good for his latest play, Nightfall, an equally intimate drama for just four actors. 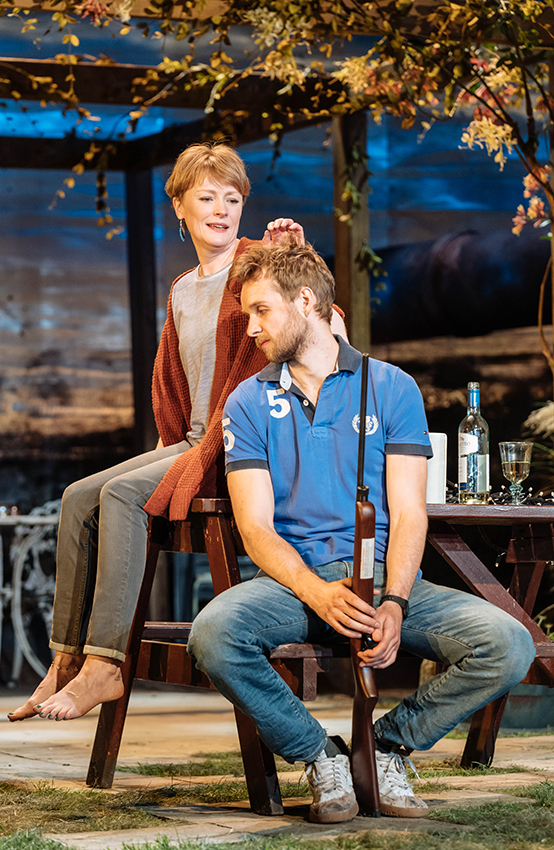 A mother and her grown-up daughter and her son, Lou and Ryan, live in an isolated run-down farmhouse in Hampshire. Dad has recently died. Times are hard. The farm is not financially viable. There are debts and bills to pay.

Laurie Sansom’s production is acted on a thrust stage. The striking setting (designed by by Rae Smith) is a dirty garden, made even more unappealing by a huge ugly public oil-pipe which runs right through it.

Ryan and his best mate, Pete, are siphoning off oil. If they are caught (and the likelihood is high) they will be going to prison. Pete has just come out of prison. He is in love with Lou and wants to marry her and take her with him to Dubai where he has had an offer of work. Mum is appalled.

Nightfall is a slow burner and it isn’t until after the interval that there is any real drama.

Norris’s sensitive play really does need a studio space. It gets lost in a vast arena. The Bridge Theatre was not full, which meant also that the acoustics were not good.

The acting is very good, though. Claire Skinner, more urban than rural, is the bereaved mother who won’t let go of her children. “I’m here for you,” she tells them. They only wish she weren’t. Grief makes her very nasty.

Ophelia Lovibond is Lou who can’t wait to flee the nest. Ukweli Roach is Pete, who is prepared to make enormous sacrifices and go to prison but he is not prepared to give Lou up. Sion Daniel Young is Ryan who in love with Pete, even if he doesn’t admit it out loud.