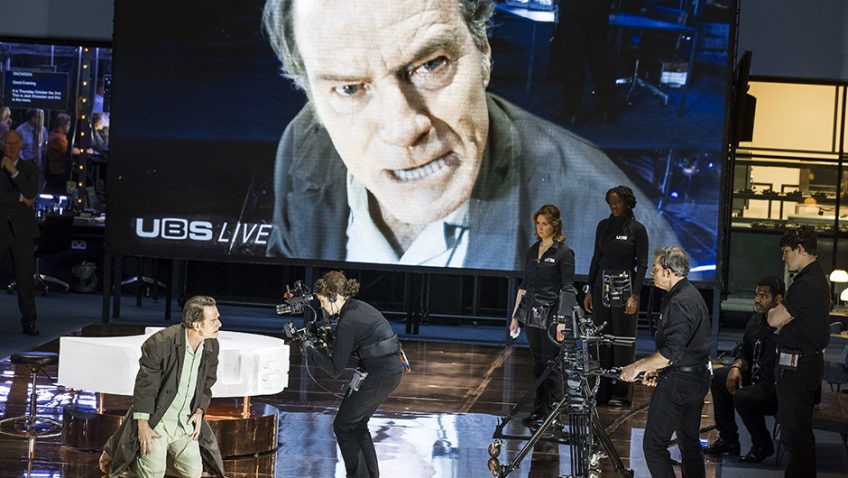 In 1976 there was a film called Network, The screenplay was by the leading television playwright of the day, Paddy Chayefsky. The director was Sidney Lumet. 40 years on, adapted for the stage by Lee Hall, directed by Ivo van Hove and starring Bryan Cranston, its impact is not diminished.

The script is a satire on the corruptive power of TV and Big Business. The dangers have not gone away. They are still with us.

News in itself is no longer enough. It has to be entertaining.

“We are not in the business of morality,” explains a chief executive whose only concerns are the ratings and the money they will bring in.

Bryan Cranston, the multi-award winning Broadway and TV actor, best known to UK audiences for Breaking Bad, is very convincing as Howard Beale, veteran anchorman, who has a spectacular breakdown on air and threatens to kill himself in a week’s time.

The TV Company’s immediate response is to sack him; but when they find he has actually boosted ratings they then want him to deliver more demented diatribes.

Beale turns prophet and messiah and rages against bullshit and hypocrisy, rousing the nation to hysteria. The public is always ready for violence and outrage and relishes his anger and frustration.

He easily persuades viewers to get off their backsides and go the window and yell “I am mad as hell and I am not gonna take this any more!” Cranston even gets the National Theatre audience to shout out.

Van Hove’s two-hour production has tremendous energy and pace and ranks amongst his very best work. The chaos is brilliantly marshalled and there is strong support from Michelle Dockery, Douglas Henshall and Tunji Kasim.

There is a huge screen on stage which focuses on what is happening on stage and at the same time provides a huge number of little screens full of adverts and news footage.

The stage is divided into a TV studio and a restaurant. Audiences can sit on stage and have a proper meal. They might even get to sit next to two actors having their When Harry Met Sally moment.

Network is absolutely relevant and extremely entertaining, verbally and visually.