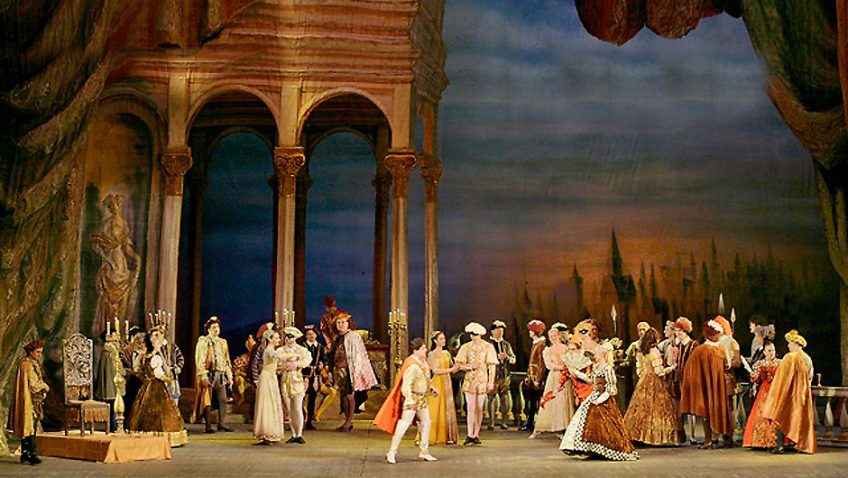 Giuseppe Verdi and Giacomo Puccini are widely acknowledged as Italy’s finest operatic composers of the 19th and 20th centuries, and with good reason. Rigoletto is seen as Verdi’s signature work and Madama Butterfly is one of the world’s most loved operas. The 2018 tour of these two well-known works are a must for regular opera buffs and opera novices alike.

Rigoletto is the dramatic tale of the daughter of the jester to the Court of Manuta, whose heart is stolen by a charming but unreliable ruler, and how her father’s attempts to prevent the love affair lead to tragedy. Based on a play by Victor Hugo, the opera was almost banned when first performed because it exposed the licentious behaviour of the powers-that-be.

This is a stunning and traditional production that recaptures the decadence and colours of Renaissance Italy, with lavish sets and opulent costumes. This spectacularly staged production also features a magnificent golden eagle and two regal hunting dogs, adding to the depiction of the extravagance of the Mantuan Ducal Court.

For a brief preview, see below:

As we go to press, the international baritone, Lurie Gisca, will be starring as Rigoletto, alongside the critically acclaimed soprano, Alyona Kistenyova, from Odessa National Opera, who will sing Gilda. Acclaimed Spanish tenor, Giorgio Meladze, will be opening the tour at The Bristol Hippodrome and will star as The Duke of Mantua. The American mezzo-soprano, Zara Vardanean, returns to sing the part of Giovanna.

The production will be sung in Italian with English surtitles. Please Note that some scenes contain nudity.

Madama Butterfly is one of the world’s best-loved operas and tells the heart-breaking story of a beautiful, young Japanese girl who falls in love with an American naval lieutenant, with dramatic and heart-wrenching results.

This magnificent production boasts exquisite sets, such as a spectacular Japanese garden, and sumptuous costumes, including antique kimonos from Japan, all of which combine to bring 19th Century Nagasaki to life. Puccini’s powerful score includes some of the most memorable arias; melodic Coro a Bocca Chiusa (Humming Chorus), the moving aria Un bel di (One Fine Day) and the unforgettable Love Duet.

For a brief preview, see below:

International Korean soprano, Maria HeeJung Kim, from the National Opera House of Seoul, will be making her debut in the UK, singing the role of the tragic Cio Cio San. Spanish tenor, Giorgio Meladze, will be singing the part of Pinkerton, with Zara Vardanean singing the the part of Suzuki.

Both Rigoletto and Madama Butterfly will be sung in Italian with English surtitles.

Vasyl Vasylenko, the artistic director and conductor at the National President’s Orchestra of Ukraine, will be conducting 30 members of the outstanding National Ukrainian Orchestra, for the performances of both operas. For more information and for tickets for Rigoletto, please go to:
http://www.atgtickets.com/shows/rigoletto/

For more information and for tickets for Madama Butterfly, please go to: http://www.atgtickets.com/shows/ellen-kent-madama-butterfly/