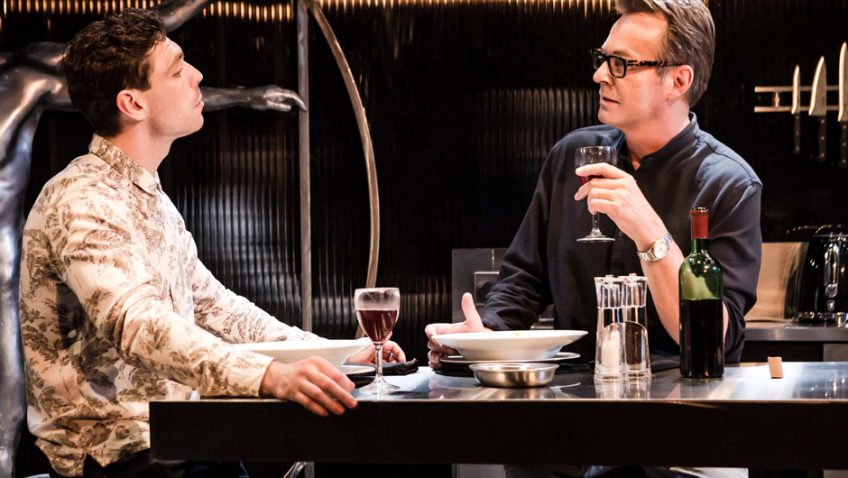 Julian Clary is on stage and in a play

Stephen Clark died prematurely in October 2016, leaving behind a play he had written specifically for Julian Clary, unperformed.

Clary, who has come a long way since The Joan Collins Fan Club and Sticky Moments in the late 1980’s, has been reported as having said that the play will take him so far out of his comfort zone that he may never return. Audiences who think they know what to expect from his TV appearances and his stand up shows – camp comedy, crude one-liners and lots of innuendo – may be surprised how dark this particular material is.

The only time he has appeared on a West End stage outside of pantomime was when he appeared as Emcee, the Master of Ceremonies, in Cabaret.

The play, directed by Christopher Renshaw, opens with a long monologue which Clary delivers whilst cooking pasta for his guest. His subject is orgasm and death

Lots of names are dropped: Princess Diana, Marilyn Monroe, Rasputin and Tutankhamen. There is a lot of graphic sex detail and sex with not only mummies but mummy as well.

The description of archaeologist Howard Carter defiling the body of Tutankhamen is particularly vivid. Stephen Clark, writing in verse, has undeniable flair.

The guest, a young man, finally turns up. They play mind games. James Nelson-Joyce takes off all his clothes and poses, zizzi nu, in front of the da Vinci. The big question is who is going to knife who with the kitchen knife and where?

The Trafalgar Studios seats 100. Clary’s next appearance is in pantomime in the 2,251 seat London Palladium. He is playing the Spirit of the Bells in Dick Whittington

A major theatre ought to invite Clary to play one of the great fop roles in Restoration comedy: Sir Foppling Flutter in George Etherege’s The Man of Mode or Lord Foppington in John Vanbrugh’s The Relapse.