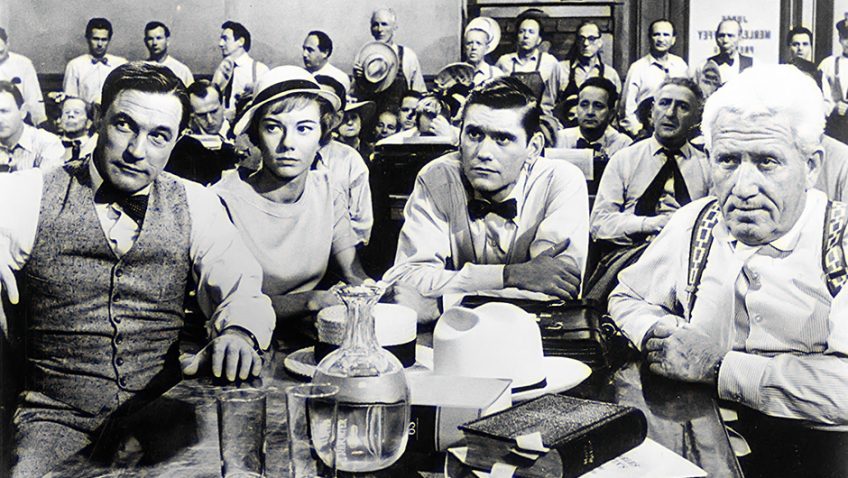 The battle between Evolution and Creationism continues

Inherit the Wind (Eureka) is a battle between Evolution and Creationism, a battle between the right to think and bigotry, based on the notorious Scopes Monkey trial in 1925. A young teacher is arrested for teaching Darwin’s On the Origin of the Species (published in 1859), a criminal offence in the Bible-belt fundamentalist state of Tennessee. The town sings Give Me That Old Religion and carry placards: Down with Darwin and Don’t Monkey with Us. The trial was a showcase for two great lawyers Clarence Darrow (Defence) and William Jennings Bryan (Prosecution). The lawyers were played by Paul Muni and Ed Begley on the New York stage in a play by Jerome Lawrence and Robert E Lee in 1955 at the height of the McCarthy trials. The 1960 Stanley Kramer screen version has Spencer Tracy and Fredric Marsh and they have a great time in the courtroom, hamming it up and blatantly upstaging each other. Bryan is humiliated but John Scopes is still found guilty Gene Kelly is cast as a cynical journalist.

The Ice King (Dogwoof).James Erskine’s documentary of the British figure skater John Curry (1949-1994), whose innovations and virtuosity won him the 1976 Olympic Gold Championship and this enabled him to form his own company and create a Dance Theatre of Skating and classical ballet on ice. His musicality, his positions and body-line were superb as can be seen in clips of his performances: at the Olympics and in Burn to music by Jean-Michel Jarre at the Albert Hall. Also on record are Symphony on Ice to the William Tell Overture at the Met in New York and the expressive Moon Skate to music by Ravel . He had his demons (despair, loneliness). He lived a gay life in New York and ended HIV positive. “All my friends have died of AIDS,” he said. “Now it’s my turn.” He was only 44.

All the Money in the World (Sony). John Paul Getty III’s 16-year-old son is kidnapped in 1973. Getty, the richest man in the history of the world and so notoriously mean, he refuses to cough up $17 million, arguing ransom money is not tax deductable. Christopher Plummer is excellent in the role which was originally played by Kevin Spacey until his scandalous Behaviour became public. Director Ridley Scott, fearing the film would bomb at the box office if Spacey remained in it, replaced him and reshot. The film, an entertaining epic thriller, is well worth seeing for Plummer’s performance alone. Michelle Williams is cast as the boy’s distraught mother.

Molly’s Game (STX) Aaron Sorkin writes and directs. Jessica Chastain is Molly Bloom who has nothing to do with James Joyce’s Ulysees. This Molly is a former Winter Olympics skiing champion who turns hostess for high stakes poker games for Hollywood stars, rich businessmen and Russian mobsters. She makes a lot of money. When she is arrested by the FBI she takes her cue from John Proctor in Arthur Miller’s The Crucible and refuses to name names. She has integrity. Idris Elba is her lawyer. Michael Cera is a gambler who doesn’t like poker; he just likes destroying people financially. The constant voice-over becomes tiresome.

Breakheart Pass (Eureka) is an underrated Western about the thwarting of selling guns to the Indians. Most of the murderous action takes place aboard a train. It’s not too difficult to sort out the goodies from the baddies. Tom Gries directed Alistair MacLean’s action thriller in 1975, a perfect vehicle then for Charles Bronson who plays a secret serviceman. Ed Lauter stands out in the supporting cast. The real star, however, is the steam train and especially when it is blowing smoke and travelling through the Rocky Mountains.