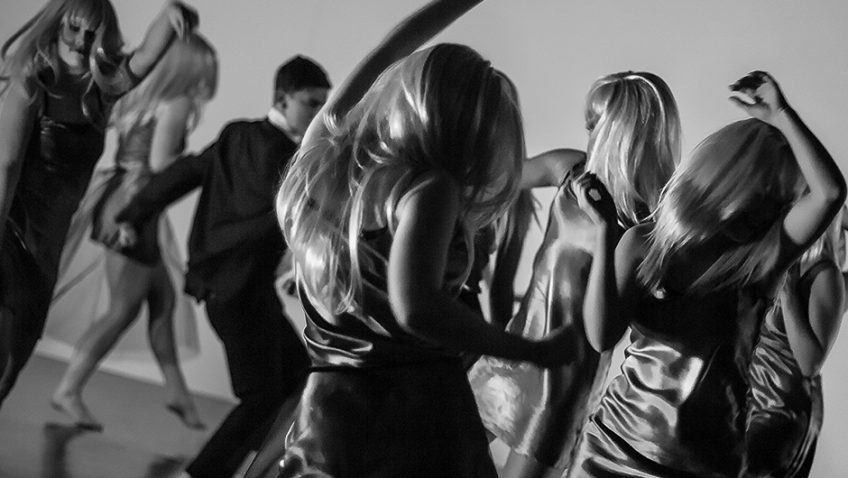 A camp look at the legend of Jayne Mansfield

In the space of seven months there have been three feature documentaries about legendary Hollywood actresses who had brains; bad taste in men; too many messy divorces and promising careers cut short by bad decisions, bad conduct, and the cruelty of the studio systems that owned their artists under contract. Gloria Graham’s tragic ending was put under the spotlight in Film Stars Don’t Die in Liverpool last November and four months later Bombshell: The Hedy Lamaar Story told us how a woman whose real life was more dramatic than any of her films became a prisoner of her beautiful face. Now, 50 years after her tragic death in a car accident, at age 34, it’s Jayne Mansfield’s turn. P. David Ebersole and Todd Hughes (Hit Me Hard) present ‘a true story based on rumour and hearsay’, about the cult of Jayne Mansfield.

A Greek Chorus is appropriate for a tragedy but it depends on the lyrics and the singers. Four thirty-some-things, two of whom are men, dressed in a slip and wearing platinum wigs, sing:

The Miss Roquefort refers to one of many beauty pageants young Jayne entered and won – or, in this case – did not enter as it ‘didn’t sound right.’ The tasteless little ditty from the Greek chorus suggests why no one from the family is going to be participating. The filmmakers claim they did not invite anyone directly involved with Mansfield’s life to comment as they are interested in the mythologizing on the public vision. Like their film Room 237 the filmmakers are less interested in what is true than in how the story lives with the audience and groups of obsessives.

The problem with this approach is that in order to appreciate the distortions and the myths, we first have to know what the true story is. And Mansfield’s is so interesting, we want it straight. If most of it comes from public appearances and newspapers (there are a lot of headlines in the film), that’s where most of our knowledge of any celebrity comes from. The only real example of people ignoring the truth for the myth is the grim subject of her alleged decapitation.

We are told that Jayne, her ‘partner’ (the abusive lawyer Sam Brody never became her fourth husband) and an adult driver were in the front seat of a convertible en route to a meeting in New Orleans. Three of Jayne’s five children were asleep in the back seat. The car tried to pass a truck, hit it, and the impact killed the three adults instantly. If the children escaped with their lives (we never hear what became of them), it is because they were lying down. Although there is no evidence that Mansfield was decapitated, we are told that rumour persists to this day that she was. The filmmakers never attempt to explore why this is the case, but we can assume that people like the macabre. It enhances the truly bizarre story of Mansfield’s relationship with Anton LaVey, founder of the all black Church of Satan on California Street in San Francisco (demolished in 2001).

In order to blur the lines between truth and hearsay, the filmmakers eschew recreations (and apparently film clips of sufficient length to highlight Mansfield’s talent) we have songs, animation sequences, and sporadic dancers in blond wigs prancing around barefoot like in a whisky-a-go-go. Not only do these gimmicks add nothing to the narrative, they are irritating. 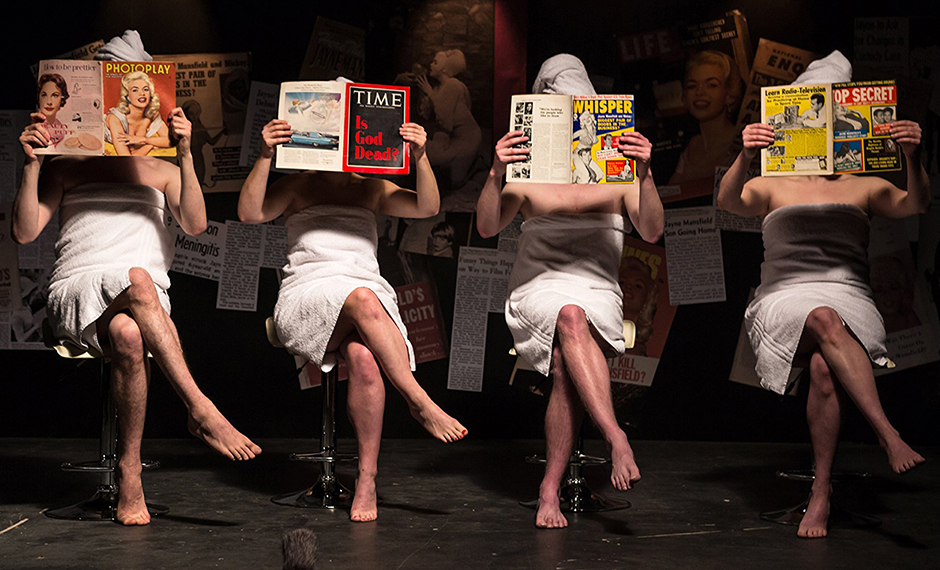 Despite Ebersole’s and Hughes’ determination to treat the story with camp humour, Mansfield’s life was tragic. But that doesn’t mean, as Director John Waters comments that Mansfield was self-aware. ‘She was always in on the joke,’ he comments. And artist/author/columnist Mary Woronov believes that ‘she was camp before it was invented. If you were hired [to] become Marilyn Monroe because Monroe wasn’t working any more, I mean, wouldn’t you make fun of yourself?’

Skipping over her early life, (she got her start as a Playboy Centerfold) the film marks her major films with a short clip (including her first film, Illegal in 1955, The Girl Can’t Help It (1957), Will Success Spoil Rock Hunter? (1957) and Promises, Promises in 1963, which became the first Hollywood film to feature a nude actress (nude from the waste up).

Not much time is devoted to her husbands, other than her six-year marriage to Miklós “Mickey” Hargitay, a Hungarian body builder and actor (played by Arnold Schwarzenegger in the impressive 1980 TV movie, The Jayne Mansfield Story). She had three children with Hargitay but, according to a talking ahead, tended to discard men who had lost their publicity value in her life.

Her third husband, Matt Camber who directed Mansfield in her late film Single Room Furnished under his real name, Matteo Ottaviano, kidnapped their 11th-month-old son, although we don’t hear his side of the story. Mansfield sent her last partner, the lawyer Sam Brody, to bring the boy home and help her to win custody. So was Brody, at last, a good guy? Well, talking heads tells us he got her hooked on drugs and alcohol (by 33 she was looking bloated and ten years older). And then in a rage, he smashed up some of Anton LaVey’s talismans and was cursed.

Ah yes, Anton LaVey, arguably the most important man in her life, although it is only speculation that they had an affair. One of the questions that the film asks half in jest is, ‘was her life spinning out of control in the last two years of her life or…did the devil make her do it? Half of the film is devoted to the bizarre story of the devilish LaVey and glamorous star, two self-promoters who thrived in the public eye and would do anything to stay there. Rumour has it that LaVey, who never liked Brody, cast a spell on him, predicting he would die in a car crash. LaVey warned Jayne to leave him. When Brody was in fact involved in several car accidents, he and Mansfield took LaVey to a fancy restaurant in L.A. and begged him to drop the spell.

If you are wondering what 88-year-old Tippi Hedren’s name is doing in the credits, well, it’s all perfectly simple. You see, LaVey had a pet lion, but he became rather noisy and the neighbours didn’t like the large bones he left scattered on the lawn and she has a nature reserve… Alas it is very difficult to understand what Hedren is saying, but it’s fun watching the animal eye on her jumper.