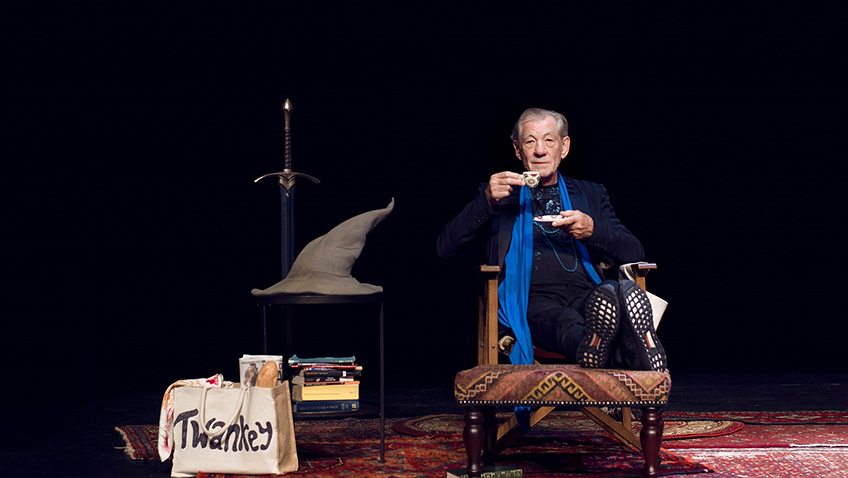 Ian McKellen has been celebrating his 80th birthday touring the UK in one-night stands with his one-man show, visiting old haunts and discovering a few new ones.

He has visited 86 theatres for I75 performances (all of them sold out) and raised nearly three million pounds for theatrical charities. He is back in London for a further 80 more fund-raising performances.

He is dressed casually. The stage is bare except for a much labelled travelling trunk which holds his props and all Shakespeare’s plays. 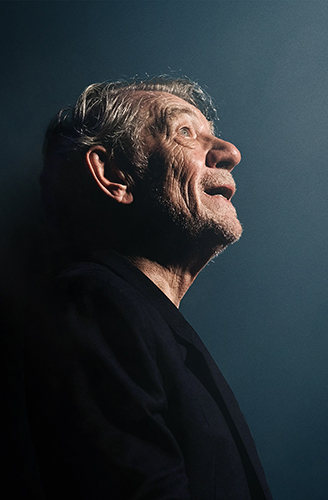 Ian McKellen became famous when he played a double-bill in the West End in 1969 alternating Shakespeare’s Richard II and Marlowe’s Edward II. He remains the best Richard II I have seen.

He has played many Shakespearian roles and amongst them are Hamlet, Coriolanus, Iago, King Lear, Macbeth and Richard III, the latter two preserved on film and well worth watching.

He has acted in classic plays, such as John Ford’s Tis Pity She’s A Whore , Anton Chekhov’s Platonov, August Strindberg’s Dance of Death and in modern classics, such as Martin Sherman’s Bent, Peter Shaffer’s Amadeus, Samuel Beckett’s Waiting for Godot, and Harold Pinter’s No Man’s Land.

His one-man show opens with his most famous role – Gandalf. Who else? “You shall not pass!” he bellows. He has Gandalf’s sword and his hat and a paperback of Tolkein’s Lord of the Rings, all 1,069 pages, which he admits he had not read before he was cast.

His next role is Widow Twankey which he played in the Old Vic’s Aladdin in 2004. He loves pantomime and a delighted audience is showered with sweets and fruit.

His third role is T. S. Eliot’s Gus, the theatre cat, which he plays in the film of Andrew Lloyd Webber’s Cats which is to be released this Christmas.

McKellen remembers going backstage at a theatre in Bolton, his hometown, as a child. The visit inspired to become an actor. He hankers after the days when the National Theatre, under the artistic direction of Laurence Olivier, was a repertory theatre.

He gives vivid accounts of auditioning for Cambridge University (and winning a scholarship), receiving his knighthood from the Queen at Buckingham Palace, and finally when he was 48 coming out as gay to his step-mother who admitted she had always known! He has been championing gay rights ever since.

The second half is devoted to Shakespeare. He asks the audience to shout out a title and then tells either an anecdote or recites a passage. High spots include the deeply moving “Fear no more the heat o’ the Sun” from Cymbeline, and extended quotes from Macbeth and The Tempest.

He also tells the story of an actor playing Henry V and having to read out the names of the French dead after the battle of Agincourt and finding the paper he has been handed is blank and has no list of names. He makes the names up! It’s hilarious.

McKellen’s show lasts 2hrs 35 minutes including interval. The audience’s warm rapport with him and his with them is immediate. His energy and joy to be acting are palpable. Happy birthday, Ian.