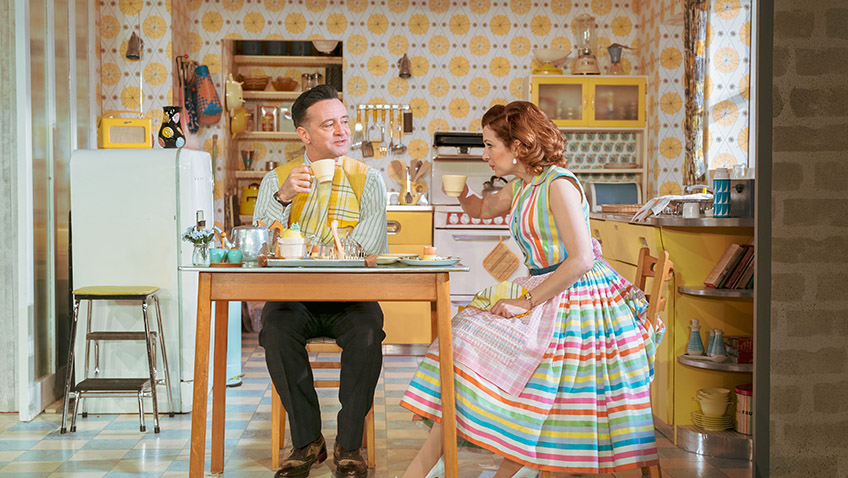 Laura Wade’s Home, I’m Darling premiered at Theatr Clwyd, transferred to the National Theatre, and is now in the West End. Wade, best-known for her abrasive play about the Bullingdon Club, Posh, is now writing about gender roles today and how the housework wives do is grossly undervalued.

The statement which gets the loudest response of outrage from female members of the audience is when the husband says to his housewife “How can you be tired? You don’t do anything.” 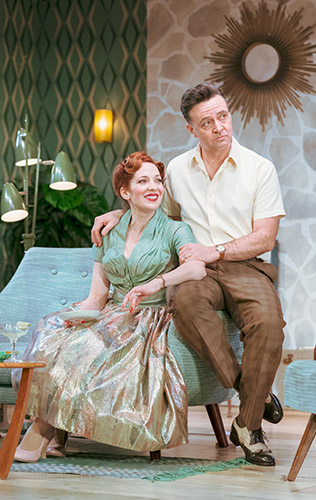 Johnny (Richard Harrington) is an estate agent. Judy (Katherine Parkinson) is a 38-year-old wife who loves housework. They are devoted to each other and are blissfully happy.

They live in the 21st century but behave as if they are living in the 1950s. The house, the furniture, the clothes, the kitchen, the diet are all 1950s.

Judy had a successful career but when she was made redundant at 35 she decided, with her husband’s full approval, that her next full-time job would be to be a 1950s housewife.

Parkinson sashays so wittily in a very full skirt that every move makes her look as if she is modelling the dress.

There was a time when middle-class wives didn’t work. They stayed home, raised children and kept house. Wives were expected to be obedient and subservient. Katherine’s manifesto in Shakespeare’s The Taming of the Shrew lay down what was expected of wives in 1590.

Judy is deluded, a pathetic figure. Her mother (Susan Brown), a feminist activist, tells her that she is stupid to be nostalgic for something she never knew and that the 1950s were grey and bloody awful.

Anna Fleischle’s designs give the production a brightly coloured look, straight out of a 1950’s advertisement, and director Tamara Harvey bridges the scene changes with dance music and jiving couples. The actors move to the music as they re-set the stage.