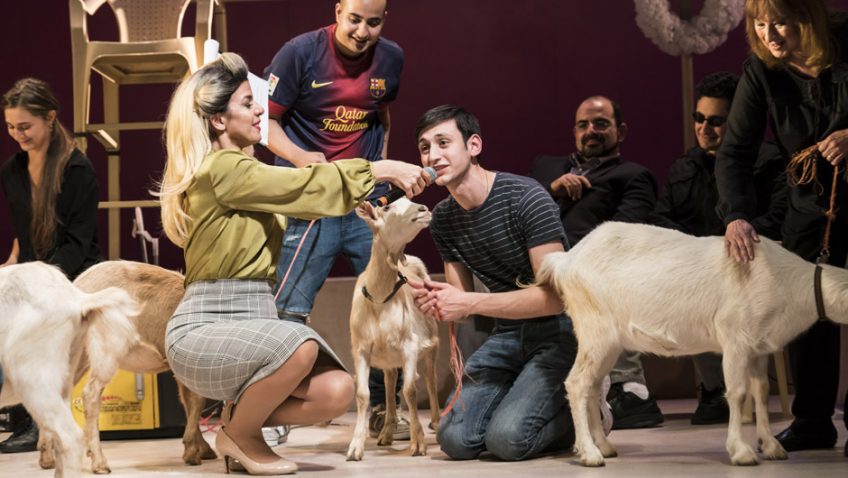 The Royal Court is proud of its long-term project with writers from Syria and Lebanon.

Liwaa Yazji’s Goats, which is set in a Syrian village far from front line in 2016, describes life under a dictatorship. 16-year-olds, forced to enlist, are being slaughtered in the civil war. A mass funeral is taking place for dead soldiers. “We are here to celebrate martyrs,” says an official. The service is interrupted by a grief-stricken teacher (Carlos Chahine, a tragic figure) whose son has been killed. He demands proof that his son is dead and in the coffin.

The government offers a mountain goat for the family of each martyr.

“What a heart-warming sight to see the village full of goats,” says the TV presenter (Sirine Saba) working in collusion with the dictatorship.

Brainwashed villagers appear on National television to make rehearsed propaganda statements about martyrdom. Lies are the norm. Better to accept them and stay alive.

The village has been nominated for an award for giving the most martyrs in a single day. With luck, they might win the title. And if they do, what an honour! The satire is at its best when the TV presenter is on stage.

A soldier returns from the frontline to tell his wife and his mother (Souad Faress, formidable in silence) the truth about the war but they don’t want to know about the horrors.

The English translation is, fortunately, shorter than the original play in Arabic; but Hamish Pirie’s production with interval still lasts two and a half hours.

There are 17 scenes, which are far too many; and far too many of them are poorly acted. The dialogue is stilted. The play is diffuse and a mess; it needs more work. What Liwaa Yazji has to say would be far better served in a documentary.

There are 6 goats on stage. The goats are friendly and affectionate and exceedingly well behaved. There’s no droppings and they do not bleat.

There are plenty of roles in cinema for goats but there are very few opportunities in theatre. There is a major role in Edward Albee’s The Goat or Who is Sylvia? But it’s not much fun playing a dead goat. A great role for goats would be Pan; but whenever there are auditions, humans always get chosen.