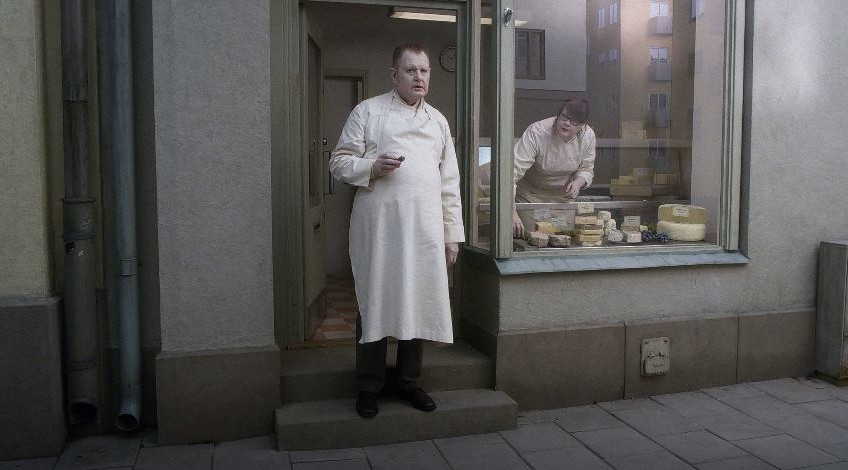 Award-winning Swedish Absurdist Roy Andersson offers a series of satirical, bizarre, deadpan, surreal tableaux, directly and indirectly critical of society. There is no story. The camera remains static for these strange, fantastic, extended single shot black comedy sketches. I was often reminded of Edward Hopper.  Andersson is an acquired taste; but once acquired you could well become hooked. Or not, as the case may be.

SONGS FROM THE SECOND FLOOR (2000) is the first in his trilogy of being human. (It’s not easy being human.). A man apologizes to a dead man for not paying his debt whilst he was still alive. We see a traffic jam and a march of flagellators through a shop window. Trolleys are piled ludicrously high with luggage. A hearse and mourners wait at the bottom of a cliff for a suicide to jump. A little girl (a modern Iphigenia) is sacrificed. A man fails to make money out of large and small wooden crucifixes and throws them on a rubbish dump.

YOU, THE LIVING (2007) is the second in the trilogy: a downpour of rain, more traffic jams, more unhappy, lonely people, leading unfulfilled lives (“I can’t cope any more”) in bleak small rooms, all hankering after a better future. There is always something going on in the background of these static scenes, observed through open doors or out of windows.  A man destroys a 200-year-old dinner service and is sentenced to death. A speaker takes a phone call from his son during a patriotic jubilee dinner celebration. Most surreal of all, a bride and groom, to cheering crowds, take their leave in a moving house.

A PIGEON SAT ON A BRANCH REFLECTING ON EXISTENCE (2014) is the third in the trilogy. Two gloomy novelty salesmen want people to have fun. A dying woman wants to take her handbag with her to heaven. A Flamenco teacher cannot stop fondling a student. A former ferry captain suffering from seasickness turns hairdresser. The most brutal sketch is the burning of Negro slaves. The most extraordinary is the arrival of 18th century King Charles XII in a modern bistro with his army (viewed through the window) marching past.

It was watching A Pigeon Sat on a Branch Reflecting on Existence that made me want to see Andersson’s other works. It can be bought separately.

A SWEDISH LOVE STORY (1970) was Andersson’s first full-length film. Two young teenagers (Anne-Sofie Kylin and Rolf Sohlman) fall in love and have idyllic, pre–adolescent sex. They are so much sweeter than the adults. Nothing dramatic happens until the final sequence, much of it taking place in fog, when it seems as if one of the partying adults has drowned.