Home / LIFESTYLE / REVIEWS > / THEATRE REVIEWS / How much is a slave worth and what is the price of freedom? 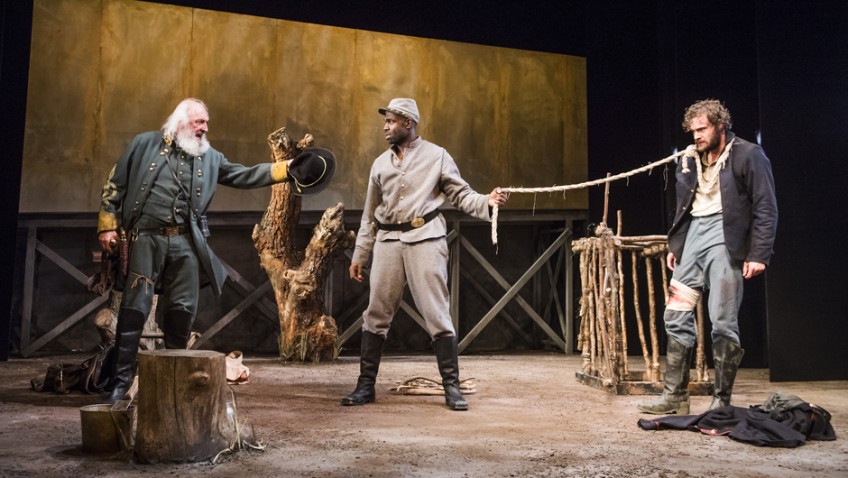 How much is a slave worth and what is the price of freedom?

The Pulitzer prize-winning American playwright Suzan-Lori Parks goes back to the Greek tragedies and Homer’s Odyssey to find a format for her play which is set during the American Civil War.

The main characters have Greek names and there is also a Chorus, a Messenger and a musician.  The artificiality, classical and colloquial, gives the drama, serious and comic, a fable-like quality and that is its special appeal.

Jo Bonney’s production has a fine ensemble of actors who get it exactly right. Hero (Steve Toussaint, a man of stature), the slave of a Texan white landowner, is offered his freedom if he will fight on the Confederate side with his master. Can he trust his master to keep his word?

The story is told in three parts. In the first part, “A Measure of a Man”, the Chorus and a very old man take bets whether Hero will fight or not, The Chorus is divided. The old man, a father figure, urges him to go.

In the strong second part, “A Battle in the Wilderness”, the white master (John Stahl) debates with a captured, wounded and caged Yankee (Tom Bateman) how much a slave is worth.

A slave is worth $800 dollars.  But how much is a slave going to be worth when freedom comes? It seems like that the worth of a coloured man, once he is made free, is less than his worth as a slave. A free man is worth nothing.

Stahl’s arrogant white man, so proud to be White, weeps at the thought of losing the slave he owns.

Jimmy Akingbola is Homer, the slave who ran away and had his foot cut off when he was caught. Homer and Hero are rivals in love.

The third part, “The Union of My Confederate Parts”, begins with a Messenger artfully delaying his message. The Messenger is a talking dog, amusingly played by Dex Lee.

The liberated Hero comes home, his name, character and circumstances changed; but in ways which are so out of character that they do not convince.

The three parts are the first in Suzan-Lori Parks’ intended cycle of nine plays. Already there is a feeling of a modern classic in the making, something comparable, potentially, to August Wilson’s “Pittsburgh” cycle.