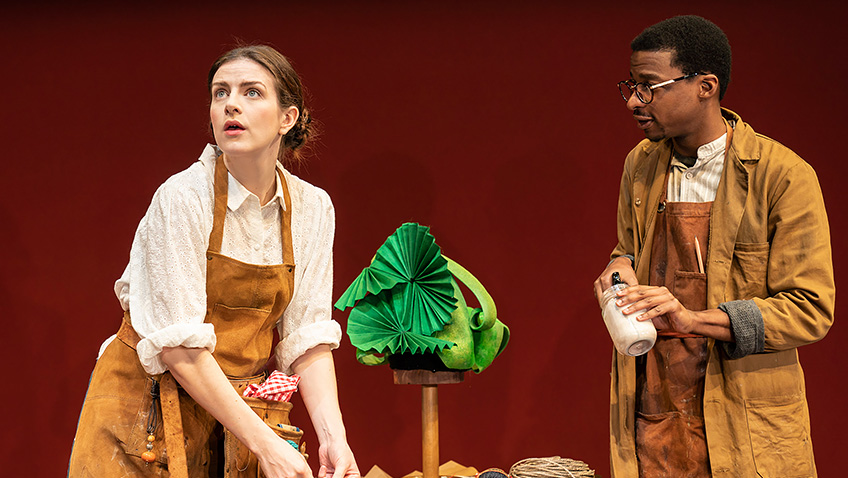 Peter Brook has praised her ability “to penetrate into the darkest zones of daily reality where la vie intime overlaps with universal chaos”. 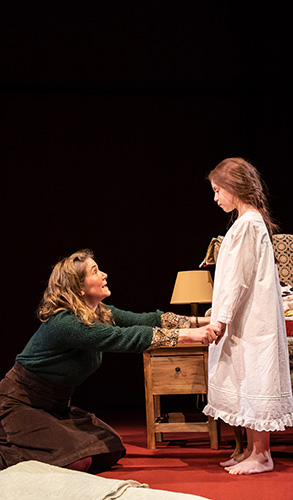 Abbiegail Mills and Jessica Hynes in Far Away

Far Away, a surreal and disturbing political fable, premiered at Royal Court Upstairs in 2001 and transferred to the West End. The play is very short, lasting just 45 minutes.

The whole world is at war. Everybody, humans, animals, birds, insects, even the landscape and elements, are engaged in atrocities. It’s impossible to know who to trust.

The cats are on the side of the French. The elephants are with the Koreans. The weather has joined the Japanese. Who is going to mobilise darkness and silence first?

The opening scene, set at dead of night, has a little girl describing what she has just seen – her uncle bludgeoning people to death in the woodshed.

In the following scenes, very fragmentary, two ill-paid workers are in a hat factory making elaborate and preposterous hats.

The hats are going to be worn by condemned prisoners before they are executed. “It seems a pity,” observes the female worker, “to burn them with the bodies”.

The one thing everybody remembers who saw the Stephen Daldry production at the Royal Court is the macabre parade of prisoners in the hats.

It was the sheer number of people which amazed and the coup de theatre was even greater for being in the tiny space that is the Theatre Upstairs.

Caryl Churchill in the printed text had said that five was too few and twenty was better than ten. Her suggested number was an hundred.

The Donmar also has a large number of people on two tiers but they are not as well deployed in Lyndsey Turner’s production as they had been in Daldry’s production and they do not have the same impact.