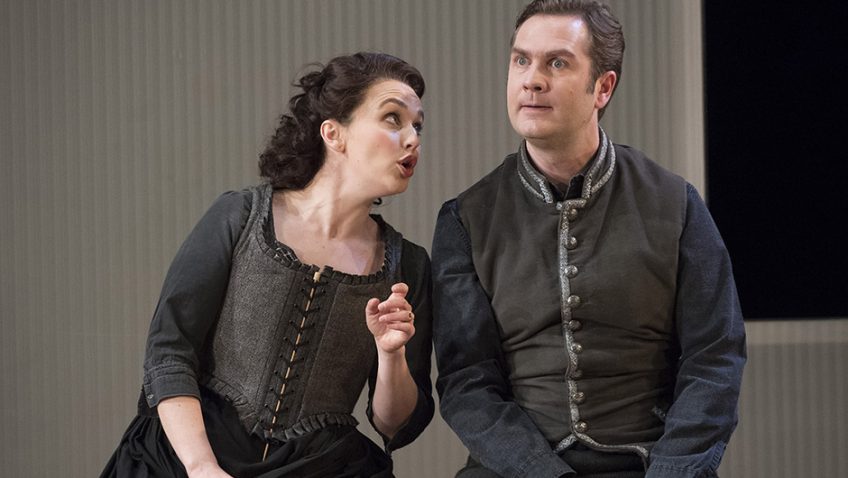 King Louis XV1 banned Beaumarchais’ Marriage of Figaro in 1778, finding the attacks on the social order and the mockery of authority and privilege detestable and thinking a production would be dangerous folly.

In 1784 his wife, Marie Antoinette, persuaded him to allow a private performance and the comedy went on to enjoy an unprecedented success, its fame sweeping Europe.

Mozart was quick off the mark and his opera opened two years later in Vienna. Lorenzo Da Ponte’s libretto cut all the subversive political stuff. 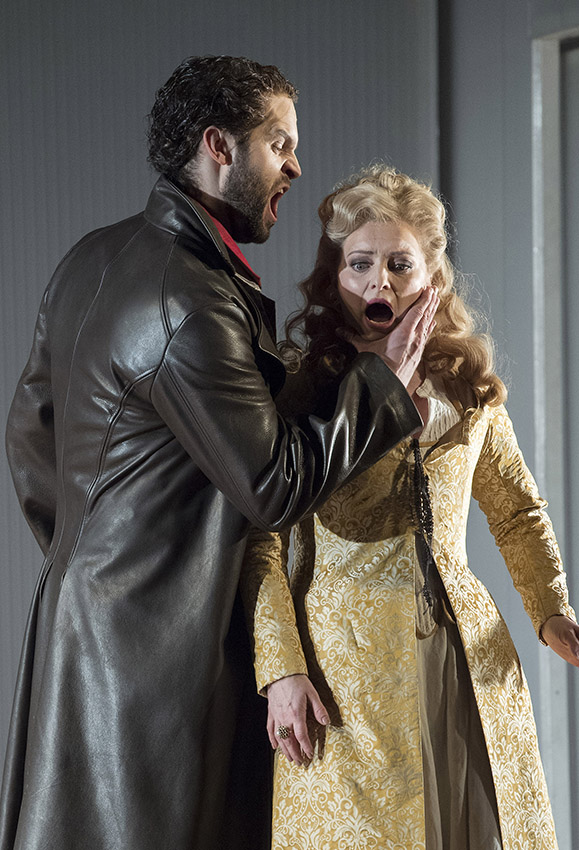 Ashley Riches and Lucy Crowe in The Marriage of Figaro

The music, a sublime mixture of wit and melancholy, humanises the farce. The ensembles are wonderful. The Act III sextet is irresistible.

Fiona Shaw’s over-busy production is incredibly distracting during the overture and it doesn’t stop being distracting. Too much is going on and much of it (such as urinating on stage) could be cut.

You may wonder why Georgia O’Keefe’s skulls of weather-beaten cows figure so prominently. The answer is Shaw sees Count Almaviva as a volatile and passionate Minotaur, in the middle of his maze, ravishing women.

Almaviva (the charismatic Ashley Riches) is doing everything he can to delay Figaro’s wedding to Susanna so that he can exercise the ancient right of le droit du seigneur and be the first to bed the bride (a vivacious Rhian Lois).

The set, designed by Peter McIntosh) is an ugly maze of white-washed walls which are constantly on the move, taking the characters round the corridors and rooms of the house, into the bathroom, and out into the garden, which doesn’t look like a garden, thus spoiling the final act. The set and costumes could do with more colour.

Lucy Crowe as the neglected countess has two glorious arias and these are the high spot of the production which is conducted by Martyn Brabbins.

The funniest moment is when Figaro (Thomas Oliemans), who is being pursued by Marcellina (Janis Kelly), a woman who is old enough to be his mother, discovers she actually is his mother and that Dr Bartolo (Keel Watson) is his dad. It is one of the great comic scenes in opera and the more often the parents keep repeating “I’m his mother”, “I’m his father” the funnier it gets.

Almaviva takes his curtain-call in his underwear. Is this a political gesture, so that when the French Revolution comes in a couple of years’ time (1792), he can say he always was a sans-culotte and escape the guillotine?