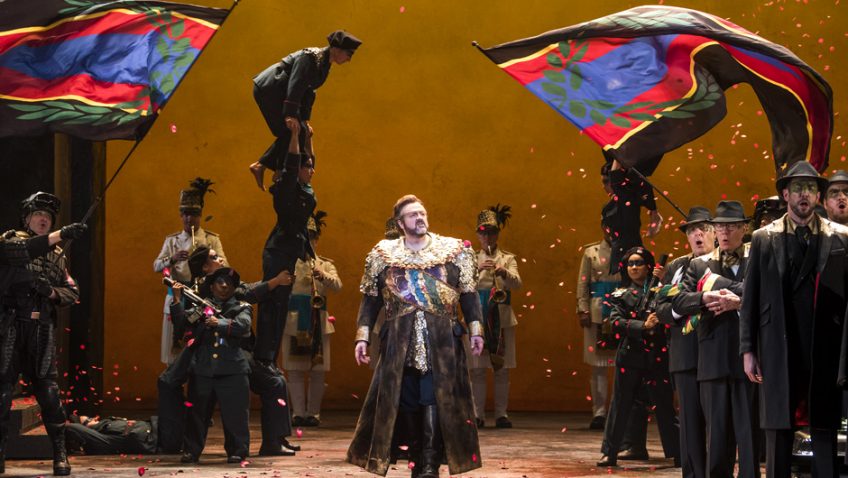 Latonia Moore has a big success in Aida

Verdi was commissioned by the Egyptians to write an opera for the opening of their new opera house in Cairo. He immersed himself in Egyptian religion, music, history and geography.

Aida, the most spectacular of all operas, premiered in 1871 and was a huge success. It has four great roles, beautiful melodies, rousing choruses and the sort of spectacle you used to find in the cinema of Cecil B de Mille. Verdi offers what sounds like a contradiction: intimate drama in monumental settings.

The very first time I saw and heard Aida I was overwhelmed.

Amneris (Michelle DeYoung), the king’s daughter, and Aida (Latonia Moore), a slave in the royal household, love Radames (Gwyn Hughes Jones), who is given command of the army and leads the soldiers to victory in a battle against the Ethiopians.

As a reward the king offers him his daughter and to be his successor. Will Radames marry Amneris and betray Aida, the woman he really loves?

The conflict of love and duty, side by side with jealousy, betrayal and self­-sacrifice against a background of jingoism, religion and cheesecake has been a staple dramatic diet for centuries.

The high spots of Phelim McDermott’s production, conducted by Keri-Lynn Wilson, are the thrilling choral singing by a much enlarged ENO chorus; Radames’s opening aria; and the arias of Aida which Moore has to sing in front of the black drop-curtain.

Kevin Pollard’s costumes are all over the place, ranging from the Book of the Dead to modern times. Particularly disastrous is the absurdly huge blancmange of white chiffon which makes the undramatic Amneris look like Bubbles DeVere in Little Britain when she is standing next to tiny Aida.

Meanwhile, the High Priestess (Eleanor Dennis) surrounded by billowing tulle looks like something out of the Follies Bergere.

Nowadays, due to health and safety, there are no camels or elephants in the triumphal march. Instead there is a modern touch, trumpeters on stage and coffins draped with flags and the crowd carrying framed photographs of the dead soldiers.

The addition of the Improbable troupe of female acrobats, who stand precariously on each other’s shoulders and clamber all over a huge prison cage, is a bad idea. They are constantly distracting and look as if they are performing in Britain’s Got Talent.