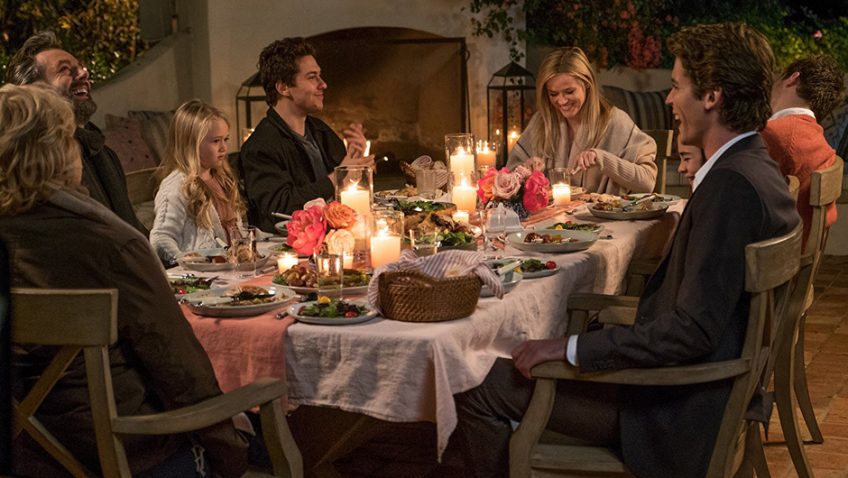 Home Again is the scriptwriting and directorial debut of Hallie Meyers-Shyer who teams up with Reese Witherspoon for a romcom that is enjoyable, but conventional and superficial. In 2017 you expect a romcom written and directed by a young woman and starring a 41-year-old female superstar to push the boundaries, but Meyers-Shyer seems to be, a bit like her heroine; living in the shadow of her more daring show-biz parents: Charles Shyer and Nancy Myers (The Parent Trap, Father of the Bride (I & II) Baby Boom, Irreconcilable Difference, Private Benjamin).

Alice (Witherspoon), a 40-year-old mother of two is estranged from her music executive husband, Austen (Michael Sheen). She has recently traded the NYC high life to go home again, and raise their two daughters in the stunning Hollywood bungalow left to her by her famous father: Oscar-winning director, John Kinney. 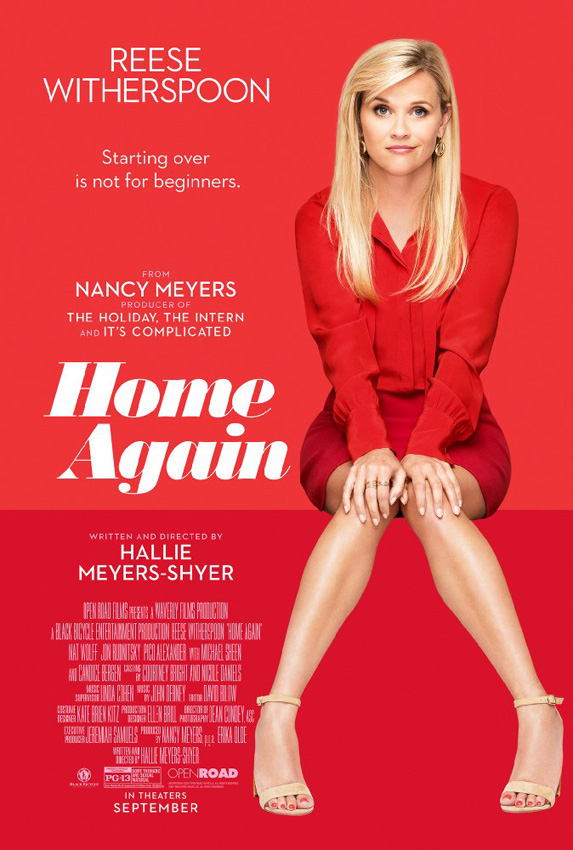 By a few quirks of fate, the three young men end up in Alice’s guest house; an arrangement facilitated by Alice’s mother Lillian (Candice Bergen) who is flattered when the young men recognise her as the star of John Kinney’s most famous film. Unlike Austen, the three guests make themselves useful with a combination of ‘free live in childcare, full-time tech support and sex,’ in the words of an impressed friend. George bonds with Isabel, rehearsing for a school play; Teddy helps Alice with her business website and lanky, handsome Harry, who is 27, seduces his hostess. Then, for no apparent reason other than to give the film a second half, a repentant Austen returns to the fold and the three house guests become jealously protective.

You have to strain a bit to find the conflict in this romcom. At no point do you feel that Alice is in any danger of reuniting with Austen, particularly as portrayed by a miscast Michael Sheen. If Alice’s one-bad-client business does not succeed she could sell a few of her dad’s memorabilia or sell the house and downsize.

As for the romance, what’s a 13-year-age difference when real life showbiz couple Director Sam Taylor-Wood-Johnson and Nowhere Boy actor Aaron Johnson started dating when she was 42 and he was 18? Sure, Harry demonstrates immaturity when he is held up by a producer and stands up Alice at a dinner party, but he learns his lesson after Alice kicks him out of her room, telling him she’s had enough of that from Austen. Being let down in relationships seems to be a theme in the film.

But despite Harry’s failure to prioritise, one of the pluses of Home Again is the positive image it lends to young, single men. It’s Alice who (rather unconvincingly and unnecessarily) who gets drunk and makes a fool of herself in public. 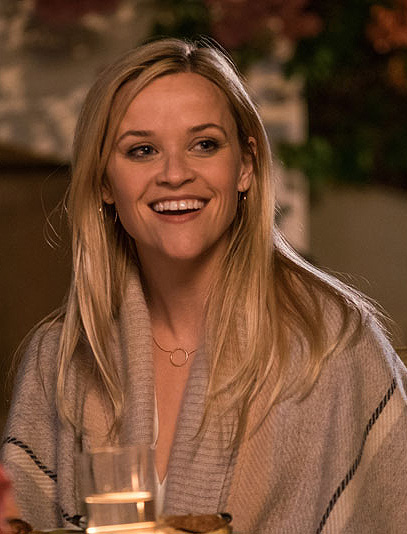 Home Again is unpretentious, light entertainment, but it is still difficult to see the point of the film. Isabel has been affected by her parents’ separation, but, with her real father in the school auditorium, why is she unable to speak on stage without a man – in this case, George – being present in the wings? If this incident occurred early in the film, we could understand it, but the male presence is necessary at the end, too. There is another creepy scene in which the three young men are sitting on Alice’s bed when Austen comes in to take her to dinner. She gives each man a kiss on the cheek like they were children, pausing when it comes to Harry with whom she has been having sexual relations.

What is never made clear, but remains an elephant in the room, is whether the awe-struck young men would have been as interested in Alice if she were not the daughter of one of their heroes. While George, in particular, spends a lot of time in her father’s study, Harry is also taken with the trappings of show biz success.

But the real problem with Home Again is that it goes over familiar ground without adding anything new. Meyers-Shyer has previously been seen in front of the camera playing small roles in the successful American comedies written and/or directed by her parents. This powerhouse team divorced in 1999 after 19 years of marriage when Nancy Myers started writing and directing on her own.

In the film, Alice’s two daughters are really Hallie and her real life sister, the inspirations behind The Parent Trap. Daughters play key roles in the films of Charles Shyer (a dead ringer for John Kenny) and Nancy Meyers, but beautiful as they are, the daughters’ function in Home Alone is tenuous. Alice, naturally, judges men in part on their potential as father figures for her daughters, but that’s about it.

There are other echoes in Home Again, a title that becomes more complex if you are reminded of Nancy Myer’s 2003 hit Something’s Gotta Give. Meyers, who was a divorced, 54-year-old powerhouse when she made the film, presents us with a 50-something divorced woman living (like Alice) in a gorgeous property who finds herself torn between a handsome, much young doctor who adores her and an older ladies’ man who ends up recuperating from a heart attack in her house. If Michael Sheen is hardly comparable to Jack Nicholson physically, their characters are both music moguls. Pico Alexander, who plays Harry, bears an uncanny resemblance to Keanu Reeves, who played the 30-something doctor in the 2003 film.

Something’s Gotta Give added the then-progressive touches of making the heroine a high-earning celebrity writer and by making her daughter the fiancée of the older man – who only dates younger women. This clever layer lends the film its feminist perspective and wonderful irony that is sorely lacking in Home Again.

Home Again is being advertised as ‘Reese Witherspoon at her romcom best,’ although Witherspoon has worked hard to break out of that image with psychologically delving biopics such as Walk the Line and Wild and dark dramas such as The Devil’s Knot and The Good Lie. But if you want to sell a movie, just conjure up the image of Witherspoon in Legally Blond, and the 41-year-old actress, still blond, will take it from there.