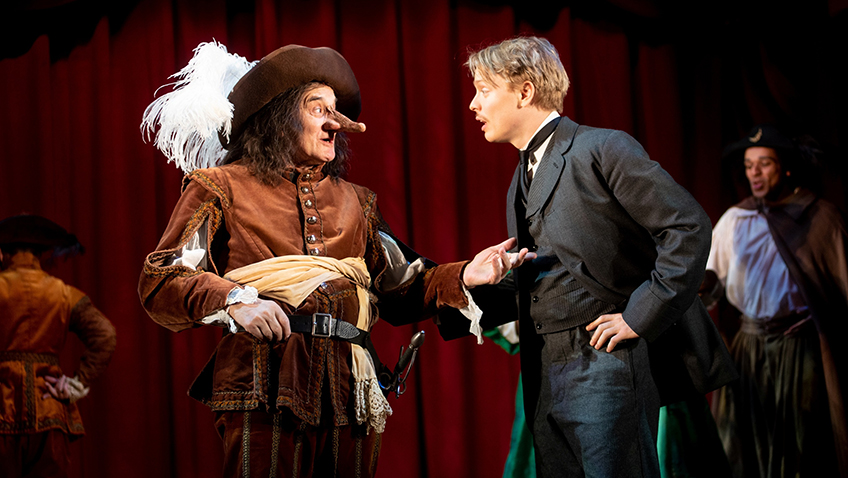 Multi-awarding winning French playwright Alexis Michalik was inspired by Tom Stoppard’s Shakespeare in Love, which, you will remember, told how Shakespeare came to write Romeo and Juliet.

Michalik imagines how Edmond Rostand, suffering from writer’s block and broke, came to write Cyrano de Bergerac, the biggest hit in its day, 1897, and which quickly became the most popular play in French theatre. 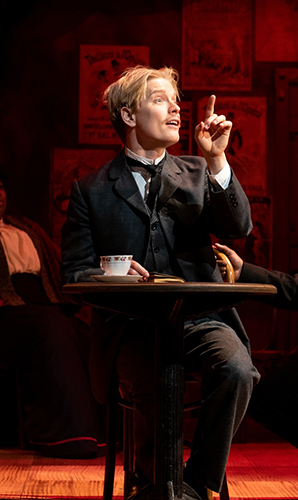 Cyrano, poet, soldier, duellist, a man of courage and wit, is one of the great romantic figures of all time, immortalised by a grotesque nose.

Rostand, at twenty-nine, in love with theatre and hankering after some long lost chivalric ideal, looked back to the 17th century; and, in a dazzling mixture of rhyme and rapier, played up the romanticism to the hilt.

For sheer theatrical panache, of an unashamedly old-fashioned kind, Cyrano de Bergerac is hard to beat.

Michalik’s farce, was a huge success in Paris (over 700 performances) and has now been made into a film which has just been released in France.

This touring production, directed by Roxana Silbert and translated by Jeremy Sams started at The Birmingham Repertory Theatre where Silbert is artistic director.

Mixing fact and fiction, the play follows the rehearsals with the great French actor Coquelin (Henry Goodman) as Cyrano and a very difficult and no longer divine Sarah Bernhardt (Josie Lawrence) as Roxane.

Rostand (Freddie Fox), apart from writing the play, is also writing love letters for a handsome but dim-witted actor friend (Robin Morrissey) who is in love with the theatre’s wardrobe mistress and hasn’t the vocabulary to express his love.

Freddie Fox, a likeable actor, plays Rostand without Rostand’s distinctive moustache which would be comparable to playing Cyrano without his distinctive nose.

Silbert’s jolly, fast-moving, highly theatrical and extremely efficient production, with its host of comic cameos, is a lot of fun.

The more familiar you are with the original play the more you will appreciate Michalik’s homage to Rostand; but the downside is that you are more likely be irritated by the inclusion of a very poorly staged, very poorly acted and ruinously abridged version of Cyrano’s’s deeply moving ldeath scene.